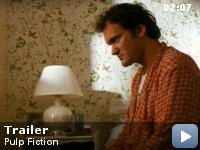 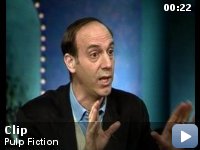 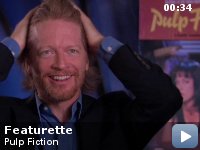 The lives of two mob hit men, a boxer, a gangster's wife, and a pair of diner bandits intertwine in four tales of violence and redemption.

Storyline
Jules Winnfield and Vincent Vega are two hitmen who are out to retrieve a suitcase stolen from their employer, mob boss Marsellus Wallace. Wallace has also asked Vincent to take his wife Mia out a few days later when Wallace himself will be out of town. Butch Coolidge is an aging boxer who is paid by Wallace to lose his next fight. The lives of these seemingly unrelated people are woven together comprising of a series of funny, bizarre and uncalled-for incidents.

Taglines:
You won't know the facts until you've seen the fiction.

The hairstyle of Uma Thurman's character Mia Wallace was loosely modeled after Louise Brooks, a silent film actress of the 1930's, and is known as the Louise Brooks bob (Uma's hair is longer but the style is the same). Brooks was also considered one of the first naturalistic actors in cinema compared to many other silent film performers of the day.

Continuity:
In the "gold Watch" scene, Butch gets out of the cab, then it cuts to Butch paying Esmarelda Villalobos. When the view returns to the whole cab again, you can tell the cab is moved back from when they first arrived.

Pumpkin:
Forget it. Too risky. I'm through doing that shit.

Yolanda:
You always say that. That same thing every time, "I'm through, never again, too dangerous".

Pumpkin:
I know that's what I always say. I'm always right, too.

Yolanda:
But you forget about it in a day or two.

The masterpiece without a message


One of the early scenes in "Pulp Fiction" features two hit-men
discussing what a Big Mac is called in other countries. Their dialogue
is witty and entertaining, and it's also disarming, because it makes
these two thugs seem all too normal. If you didn't know better, you
might assume these were regular guys having chit-chat on their way to
work. Other than the comic payoff at the end of the scene, in which
they use parts of this conversation to taunt their victims, their talk
has no relevance to anything in the film, or to anything else, for that
matter. Yet without such scenes, "Pulp Fiction" wouldn't be "Pulp
Fiction." I get the sense that Tarantino put into the film whatever
struck his fancy, and somehow the final product is not only coherent
but wonderfully textured.

It's no wonder that fans spend so much time debating what was in the
suitcase, reading far more into the story than Tarantino probably
intended. The film is so intricately structured, with so many
astonishing details, many of which you won't pick up on the first
viewing, that it seems to cry out for some deeper explanation. But
there is no deeper explanation. "Pulp Fiction," is, as the title
indicates, purely an exercise in technique and style, albeit a
brilliant and layered one. Containing numerous references to other
films, it is like a great work of abstract art, or "art about art." It
has all the characteristics we associate with great movies: fine
writing, first-rate acting, unforgettable characters, and one of the
most well-constructed narratives I've ever seen in a film. But to what
end? The self-contained story does not seem to have bearing on anything
but itself.

The movie becomes a bit easier to understand once you realize that it's
essentially a black comedy dressed up as a crime drama. Each of the
three main story threads begins with a situation that could easily form
the subplot of any standard gangster movie. But something always goes
wrong, some small unexpected accident that causes the whole situation
to come tumbling down, leading the increasingly desperate characters to
absurd measures. Tarantino's originality stems from his ability to
focus on small details and follow them where they lead, even if they
move the story away from conventional plot developments.

Perhaps no screenplay has ever found a better use for digressions.
Indeed, the whole film seems to consist of digressions. No character
ever says anything in a simple, straightforward manner. Jules could
have simply told Yolanda, "Be cool and no one's going to get hurt,"
which is just the type of line you'd find in a generic, run-of-the-mill
action flick. Instead, he goes off on a tangent about what Fonzie is
like. Tarantino savors every word of his characters, finding a
potential wisecrack in every statement and infusing the dialogue with
clever pop culture references. But the lines aren't just witty; they
are full of intelligent observations about human behavior. Think of
Mia's statement to Vincent, "That's when you know you've found somebody
special: when you can just shut the f— up for a minute and
comfortably enjoy the silence."

What is the movie's purpose exactly? I'm not sure, but it does deal a
lot with the theme of power. Marsellus is the sort of character who
looms over the entire film while being invisible most of the time. The
whole point of the big date sequence, which happens to be my favorite
section of the film, is the power that Marsellus has over his men
without even being present. This power is what gets Vincent to act in
ways you would not ordinarily expect from a dumb, stoned gangster faced
with an attractive woman whose husband has gone away. The power theme
also helps explain one of the more controversial aspects of the film,
its liberal use of the N-word. In this film, the word isn't just used
as an epithet to describe blacks: Jules, for instance, at one point
applies the term to Vincent. It has more to do with power than with
race. The powerful characters utter the word to express their dominance
over weaker characters. Most of these gangsters are not racist in
practice. Indeed, they are intermingled racially, and have achieved a
level of equality that surpasses the habits of many law-abiding
citizens in our society. They resort to racial epithets because it's a
patter that establishes their separateness from the non-criminal world.

There's a nice moral progression to the stories. We presume that
Vincent hesitates to sleep with Mia out of fear rather than loyalty.
Later, Butch's act of heroism could be motivated by honor, but we're
never sure. The film ends, however, with Jules making a clear moral
choice. Thus, the movie seems to be exploring whether violent outlaws
can act other than for self-preservation.

Still, it's hard to find much of a larger meaning tying together these
eccentric set of stories. None of the stories are really "about"
anything. They certainly are not about hit-men pontificating about
burgers. Nor is the film really a satire or a farce, although it
contains elements of both. At times, it feels like a tale that didn't
need to be told, but for whatever reason this movie tells it and does a
better job than most films of its kind, or of any other kind.