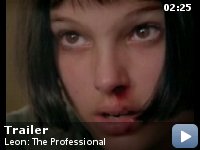 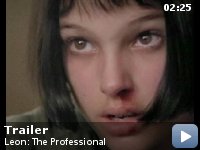 Professional assassin Leon reluctantly takes care of 12-year-old Mathilda, a neighbor whose parents are killed, and teaches her his trade.

Storyline
Mathilda, a twelve-year old New York girl, is living an undesirable life among her half-family. Her father stores drugs for two-faced cop Norman Stansfield. Only her little brother keeps Mathilda from breaking apart. One day, Stansfield and his team take cruel revenge on her father for stretching the drugs a little, thus killing the whole family. Only Mathilda, who was out shopping, survives by finding shelter in Léon's apartment in the moment of highest need. Soon, she finds out about the strange neighbour's unusual profession – killing – and desperately seeks his help in taking revenge for her little brother. Léon, who is completely unexperienced in fatherly tasks, and in friendships, does his best to keep Mathilda out of trouble – unsuccessfully. Now, the conflict between a killer, who slowly discovers his abilities to live, to feel, to love and a corrupt police officer…

(as Willie One Blood)

Taglines:
Revenge is a tough game, even for a Professional (Australia)

Léon Gaumont was a French inventor developing cinematographic techniques in the late 19th century alongside with the Lumière brothers. Gaumont is the name of the production company that made this film.

Crew or equipment visible:
When Leon tells Mathilda, at the very end, to "grab the ax off the wall", when she opens the glass door, you can see the director Luc Besson's reflection in the glass, behind the camera filming her.

Léon:
Bene.
[Tony puts out his cigarette in an ashtray]

Luc Besson's movie Léon (The Professional) gives us an intense story
which is maximized in potential by the casting of the movie done by Todd
Thaler. Every aspect of the movie delivers to the audience and makes an
impressive overall package. Jean Reno plays a character named Léon who
has
learned to repress his emotions in order to perform his job as a
"cleaner",
or hit-man. His secluded world is shattered by the young girl named
Mathilda who lives on the same floor as he does in an apartment building.
When she turns to him for help, he learns about living a normal life, even
if the circumstances which unite them are far from normal.

The performance delivered by then twelve-year old Natalie Portman as
Mathilda is nothing short of brilliant. Her ability to relate to others
with body movement and facial gestures is matched by few, she really
brings
raw emotion and believability to a difficult role. Mathilda and Léon are
unexpectedly thrown together, but learn to value life from their chance
encounter, and how valuable a friendship can be.

Jean Reno as Léon gives us a solemn and calculated character who sets
all of his energy on his assignments until her is given something else to
care about. Mathilda gives him the daughter that he never had, while Léon
serves as a father and friend to her. Gary Oldman, as the corrupt DEA
Agent
Norman Stansfield, offers the viewers an amazingly wired and electrical
performance which pushes the envelope. He moves the story along by his
actions. Oldman offers us a memorable portrait of a sadistically obsessed
man who stops short of nothing to get what he wants.

The Professional is what movie-making is all about. Without the
overuse of special effects, a large shooting location, or a commercially
star studded cast, we are given all that could possibly be asked for in a
movie. Portman, Oldman, and Reno, along with Danny Aiello as the
hit-contractor Tony remind us that there is no substitute for great
acting.
There are elements of comedy, drama, and action, and great original music
by
Eric Serra adds to the energy the film already encapsulates. The most
impressive thing about the movie is its story which is basic but is
maximized by all the other elements which go into the making of the movie.
Simply put, an intense and impressive movie.