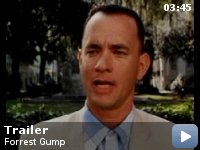 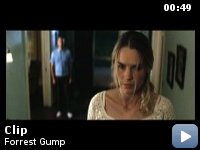 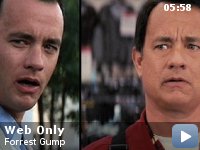 Forrest Gump, while not intelligent, has accidentally been present at many historic moments, but his true love, Jenny, eludes him.

Storyline
Forrest, Forrest Gump is a simple man with a low IQ but good intentions. He is running through childhood with his best and only friend Jenny. His 'mama' teaches him the ways of life and leaves him to choose his destiny. Forrest joins the army for service in Vietnam, finding new friends called Dan and Bubba, he wins medals, creates a famous shrimp fishing fleet, inspires people to jog, starts a ping-pong craze, create the smiley, write bumper stickers and songs, donating to people and meeting the president several times. However this is all irrelevant to Forrest who can only think of his childhood sweetheart Jenny. Who has messed up her life. Although in the end all he wants to prove is that anyone can love anyone.

Taglines:
Life is like a box of chocolates…you never know what you're gonna get.

Bill Murray, John Travolta and Chevy Chase turned down the role of Forrest Gump. Travolta later admitted that passing on the role was a mistake.

Anachronisms:
When Forrest is playing ping-pong before being discharged, the gymnasium where he's playing shows the 3-point line on the basketball court. The 3-point line was first used 29 November 1980 in a college basketball game at Reid Gym in Cullowhee, North Carolina.

A beautiful fable for now and the future


I believe everyone has a right to their opinion about films or other
topics. However from a lot of the comments I have read about this film,
I do not think many got the gist of the message from the author and the
film maker. This film is a great modern fable, a fable in the
dictionary is defined as a brief fictitious story that teaches a moral.
There are many morals defined in this film but foremost is integrity
and a simple goodness.

I have a half brother who grew up in the Southern U.S. and on one
occasion we were discussing this film and he said he felt it portrayed
Southerners as dimwitted. I disagreed with him and informed him that
the author himself was a native Southerner. The setting is central to
this story in that it lets the tale unfold tying in factual events with
the fable before us.

The film is wonderfully directed by Robert Zemeckis, the film is his
opus and is acted by a great cast on all levels. From the children who
were Forrest Gump and Gump Jr. by Haley Joel Osment. Say what you want
but I feel Tom Hanks deserved the Oscar award. Gary Sinise is
synonymous with Lt.Dan whenever you hear those words. Sally Fields is
the loving dutiful mother in her challenging situation. Mykelti
Williamson as Bubba gives you a real sense in the story that Gump had a
genuine friend, he moves you with his character. Words don't grasp the
full performance of Robin Wright Penn as Jenny. Jennys' tenderness and
pain are palpable as exhibited by Wright.

I feel that much of Gumps' appeal is his downright sense of doing the
right thing regardless of the people and situations around him and we
see that in this film. That being the case maybe we all wish we could
be just a little more like that, trying to maintain innate goodness and
not the trade-offs we often make as we go down lifes highways.

The movie has it all too,drama,comedy and it challenges societal norms
as well. Then there are the almost endless quotes from the movie that
have slipped into everyday speech. They are too numerous to say at this
point.One of the toppers for me in the movie is when Forrest is in a
quandary about life and wondering as Lt.Dan said we all have a destiny
and his Mom says it is where we are all just floating around like a
feather in the wind. Forrest's character terms it very well with this
quote,"I think it is a little bit of both." From my experiences in life
it does appear to be that way. So if you have not seen the movie,see it
soon you are in for a real treat. If you did not like it, give it a try
again and hopefully you will see it for the great story it is!