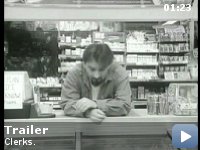 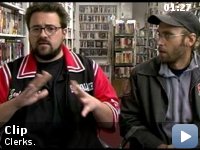 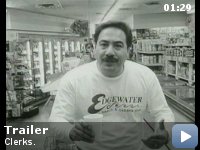 A day in the lives of two convenience clerks named Dante and Randal as they annoy customers, discuss movies, and play hockey on the store roof.

Storyline
Dante Hicks is a clerk at a local convenience store in New Jersey. On one particular Saturday morning, he gets called in on his day off. Once there, he must deal with multiple problems. The shutters outside won't open. His ex-girlfriend, whom he is still in love with, is getting married. His girlfriend, who bugs him about starting college, has revealed certain, uh…stuff about her past. His boss hasn't come in to take his place. He has a hockey game at 2 o'clock. Another ex has died, and today's the last day he can go to her wake. He must deal with customers that aren't so intelligent. His friend, Randal, a clerk at the video store next door, is even less dedicated to his job than Dante, and is always bothering Dante's customers. And the biggest problem of them all: HE'S NOT EVEN SUPPOSED TO BE THERE TODAY!! Can Dante manage it all?

Taglines:
A very funny look at the over-the-counter culture.

The film was never dubbed into German, an extremely rare occurrence for German audiences. The DVD and Blu-ray release feature German subtitles, though.

Errors made by characters (possibly deliberate errors by the filmmakers):
The official who hands Dante the summons claims that the charge can not be contested in a court of law. The Constitution guarantees that any matter involving at least $20 is eligible to be ruled on by a jury of the defendant's peers. Director Kevin Smith briefly acknowledges this in the commentary.

Dante Hicks:
[phone rings and Dante falles out of a closet]
Hello. What? No I don't work today, I'm playing hockey at two.

It's all about the dialogue


Kevin Smith has delved into action ("Mallrats"), drama ("Chasing Amy")
and philosophy ("Dogma") in his Askewniverse, but Clerks, the first
film of the series, is still the best.

Shot on a ridiculously low budget, using mostly friends and relatives
as the cast and crew (see the line in the credits where "Boom" is
credited as "whoever happened to be holding the pole"), "Clerks" is
such a great film just because it doesn't try to be more than it is.
You get the sense that this movie is in black and white not to be
pretentious, but just because it's a prosaic look at prosaic lives.

Kevin Smith's real gift is writing funny, witty dialogue, and that's
what carries this film. From Star Wars debates (did the destruction of
the second Death Star in "Jedi" cost innocent contractors their lives?)
to perfectly serious debates about sex ("Thirty-seven???"), this is the
ultimate movie for anyone who's ever been going nowhere and doing
nothing. It's a day in the life of the guy working at the corner store,
no more, no less. But it's absolutely brilliant.

People either love or hate Kevin Smith movies. Chances are, if you can
appreciate the humour of low-brow jokes about pornography as high art,
then you'll enjoy "Clerks". His brand of humour isn't for everyone.
This is his first film and it's flawed, to be sure. But in my humble
opinion, it's still Smith's best.