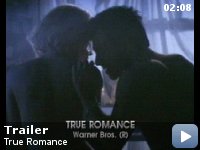 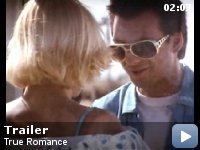 Clarence marries hooker Alabama, steals cocaine from her pimp, and tries to sell it in Hollywood, while the owners of the coke try to reclaim it.

Storyline
Clarence and Alabama are newlyweds who acquire an unexpected wedding present. Unknown to the blissfully happy couple, ruthless gangsters are on their tail, determined to reclaim their lost property

Taglines:
Not since Bonnie and Clyde have two people been so good at being bad.

Factual errors:
Virgil beats up Alabama in her hotel room when she refuses to talk. After Virgil spots the suitcase of cocaine under the bed and grabs it, he prepares to shoot the kneeling Alabama. But when he sees her armed with a Swiss Army Knife corkscrew, he is amused and tells her she can have one shot. Alabama stabs Virgil in the foot with it, temporarily disabling him. However, a Swiss Army Knife corkscrew has a dull point, and like all Swiss Army Knife blades and tools, it will not lock in the open position. Therefore, unless Virgil was barefoot, in real life Alabama's stabbing attempt would have hurt her hand more than Virgil's foot. As soon as the corkscrew met the resistance of Virgil's shoe, it would have folded back into the knife, painfully pinching any of Alabama's fingers caught in between.

Clarence Worley:
In Jailhouse Rock he was everything rockabilly's about. I mean, he is rockabilly. Mean, surly, nasty, rude. In that movie he couldn't give a fuck about nothing except rockin' and rollin', living fast, dying young and leaving a good-looking corpse.

Enough memorable scenes and talented stars to fuel a half a dozen blockbusters.

With at least 12 `starring actors' in character and supporting rolls,
half of them legends or mega stars; this Tarantino tale defies a short
review. The different levels on which this movie works are impressive.
As
a love story we begin to believe that the quirky `loser' couple is
unconditionally bound together. As a pseudo `film noir' we begin to care
about the fate of the central characters. In the suspense/thriller/crime
drama mode there are plenty twists and turns to push us to the edge and
pull
us back just in time. The action scenes are deliciously violent and
unlike
most other films, this one gives us pinches of humor sprinkled in amidst
the
mayhem. Even `the King' alter ego is woven in credibly enough to improve
our understanding of the Clarence Worley character.

The plot, albeit original, fresh and mesmerizing, seems somehow secondary
to the characters and the characterizations. Any of several rolls could
have been performed over the top by what seemed to be an ensemble cast.
But
director Scott lets the talent go just far enough. Even the remainder of
the
supporting cast is wonderful; Saul Rubinek in particular does a terrific
job
as the puffed-up/ego-feeding movie producer. Hollywood missed giving this
movie and its cast proper recognition.

With enough memorable scenes and talented stars to fuel a half a dozen
blockbusters, True Romance gives us the `best bang for our buck' in years.
The Walken/Hopper scene alone is worth the `price of admission' not to
mention the Gandolfini/Arquette and Slater/Oldman match ups. This can
only
be described as a `wonderfully wicked movie' for its tantalizing content,
smart dialog and toothsome violence.

Put the kiddies to bed, be prepared for rough language, adult themes and
graphic violence and enjoy a `not for the faint of heart' masterpiece.