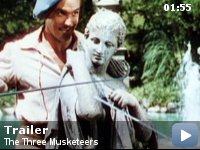 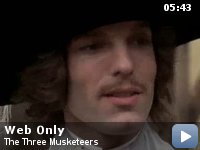 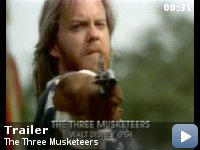 The three best of the disbanded Musketeers – Athos, Porthos, and Aramis – join a young hotheaded would-be-Musketeer…

Storyline
The three best of the disbanded Musketeers – Athos, Porthos, and Aramis – join a young hotheaded would-be-Musketeer, D'Artagnan, to stop the Cardinal Richelieu's evil plot: to form an alliance with enemy England by way of the mysterious Milady. Rochefort, the Cardinal's right-hand man, announces the official disbanding of the King's Musketeers. Three, however, refuse to throw down their swords – Athos the fighter and drinker, Porthos the pirate and lover, and Aramis the priest and poet. Arriving in Paris to join the Musketeers, D'Artagnan uncovers the Cardinal's plans, and the four set out on a mission to protect King and Country.

Taglines:
A place of betrayal. The fate of a king. A time for heroes.

Charlie Sheen was originally sought for the role of Porthos.

Continuity:
After receiving the information about the assassination from Lady De Winter, the four men are seen riding around shooting arrows to rally the other musketeers. In one shot (after which Athos' original white horse is killed) he is seen riding a brown horse. A later shot of all four of them have them all on the white horses again.

Cardinal Richelieu:
[hears the scream of a prisoner being run through]
One less mouth to feed.

A fun film, if nothing else.

First and foremost, if you have read the Dumas book, then you realize that
this movie doesn't resemble the novel in the slightest. The only thing that
this movie got right was the names of the characters!

However, I am a big advocate in saying that you should never compare a movie
back to its book, and I use this movie as an example. This story has been
"Disney-fied" so that it can be called a family film. If you read the book,
a true adaptation would not be family entertainment. Disney changed
everything that they do. Read the Tarzan novel and compare to the cartoon.
BIG changes there. The Little Mermaid. How convenient that Disney left out
the fact that Ariel dies at the end of the story.


But what we should judge is the end result. This movie is still
entertaining, despite having nothing to do with its literary influence. The
characters are portrayed with the same attributes that they have in the
book. For instance, D'Artagnan, while very duty bound and honorable, is
young and headstrong, and prone to impulsive decisions that will help him to
prove his skill and worth. Porthos is self serving and self praising, very
vain and cocky, yet has a lust for the finer things in life. Aramis is
humble and religious, but very skilled and intelligent, making him a very
formidable soldier, yet he also loves the finer things in life. And Athos
loves his wine, trying to bury himself in a alcoholic haze to hide the pain
that he suffered in losing the love of his life. All of these come through
in the movie, and all of the actors were great in performing them.

As far as the story is concerned, Disney likes things black and white, good
vs evil. And so, the story changes to make the Cardinal a power hungry man
with his own interests in mind. He wasn't like that in the book or in real
life, but he was underhanded, and Tim Curry does another great job as the
villain that he steals the show.

Overall, a great and enjoyable movie, worth watching with the
family.