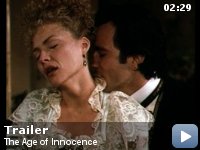 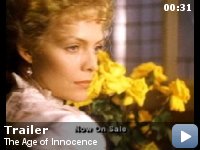 Tale of 19th century New York high society in which a young lawyer falls in love with a woman separated from her husband, while he is engaged to the woman's cousin.

Storyline
Society scion Newland Archer is engaged to May Welland, but his well-ordered life is upset when he meets May's unconventional cousin, the Countess Olenska. At first, Newland becomes a defender of the Countess, whose separation from her abusive husband makes her a social outcast in the restrictive high society of late-19th Century New York, but he finds in her a companion spirit and they fall in love.

Taglines:
In a world of tradition. In an age of innocence. They dared to break the rules.

2 months after the October 1993 opening of The Age of Innocence, Michelle Pfeiffer left Daniel Day-Lewis behind to tempt another married man: Homer Simpson. In the Season 5 episode "The Last Temptation of Homer" (which aired December 9, 1993), she played Homer's new coworker Mindy, who had the same effect on him that she had on Newland Archer.

Revealing mistakes:
When Mrs. Mingott tries to give a party in honor of Countess Olenska, not a single of her invitations is accepted, but the handwriting is the same on each separate refusal that flips by on camera.

Ted Archer:
[about his fiancée]
I'll be back on the first, and our wedding's not till the fifth.

Newland Archer:
I'm surprised you even remembered the date.


I saw "The Aviator" a couple of days ago and while I still have Howard
Hughes flying through my brain I felt the need to see again another
Scorsese. I have all of his films in my collection. I closed my eyes
and picked one, just like that, at random. "The Age Of Innocence" This
is what happens with great artists, you can always re visit them and
you'll come out of the experience with something new, something
valuable. Transported by the sublime voice of Joanne Woodward I took
the trip again to discover that everything in this extraordinary
universe that Martin Scorsese, based on Edith Wharton work, is not what
it appears. Conventions out of the window, breaking every imaginable
rule. Just as the characters get off their trucks, swimming against the
tide of the times. Scorsese breaks cinematic rules with such artistry
that we're allow to inspect, re live and enjoy a story as old as the
world from a completely new perspective. Is as if Luchino Visconti had
suddenly woken up with a new contemporary sight to look back with.
Daniel Day Lewis is so marvelous that the pain of his predicament
becomes more than visual, becomes visceral. For Michelle Pfeiffer and
Winona Ryder this was the zenith of their careers. They are
sensational. The casting, as usual in a Scorsese film, is superb even
in the smallest roles. Glimpses of Sian Phillips, Alexis Smith and
Geraldine Chaplin add to the pleasures, making this overwhelming
banquet of a film one of the most rewarding film experiences I've ever
had.