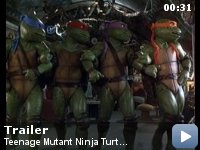 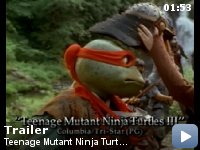 The turtles find themselves transported back in time to ancient Japan.

Storyline
The four turtles travel back in time to the days of the legendary and deadly samurai in ancient Japan, where they train to perfect the art of becoming one. The turtles also assist a small village in an uprising.

"TMNT: The Next Mutation" was a concept for fourth live-action movie should this third movie prove a success. In this concept the Ooze that transformed the Turtles and Splinter was still in their bodies causing a much more drastic 2nd mutation. Michelangelo's mutation would have gave him a more human appearance allowing him to walk amongst the people of the City. Donatello's mutation would have gave him to have psychic abilities, but have him wear an optic device because his mutation would cause his vision to deteriorate. Raphael's rage would cause him to mutate into a fearsome creature with claws and spikes jutting from his body. Leonardo would have the ability to mutate his skin into different textures. And Splinter would transform into a creature twice his size that he would have limited control over. However, the third movie was not as successful as hoped and the fourth movie was nixed. Concept art for the never made 4th movie can be found as unlockable bonus content in
Teenage Mutant Ninja Turtles: Smash-Up. The concept of having the Turtles mutate into creatures was later used in the 'New Mutation' saga of the
Teenage Mutant Ninja Turtles cartoon. Later the "Next Mutation" name was used in Saban's live-action series,
Saban's Ninja Turtles: The Next Mutation. Matt Hill, who voices Raphael, is the only actor from the films to reprise his role in the "Next Mutation" series.

Audio/visual unsynchronized:
When Splinter tells the Turtles that the scepter will be in the temple, the footage of him talking is halted in mid-sentence and rewound as he says "You will be replaced…"

Kenshin:
It will only work if the magic travellers each have the same weight.

Donatello:
Bingo! Gee, you guys *do* have a good educational system, don't you?

Okay, I was a fan of the first movie. And, embarrassingly enough, I was
sort of a fan of the second one. But this one…

Okay, first off, there's NO fluid movement to the Turtles AT ALL. They
look about as mechanically-enhanced as those crappy singing robots they
used to have at your local Chuck E. Cheese. In several shots, you can
actually SEE where the turtle mask ends and the body suit begins,
thereby magically creating the illusion that this is a guy in a turtle
costume. The Splinter costume/puppet/whatever is SO. BAD. In the first
movie, he was nuanced and realistic, but I guess that's why the folks
at Jim Henson's Creature Shop make so much. Apparently, New Line
couldn't afford them anymore.


The plot is… SO ridiculous. The "writers" send the Turtles BACK IN
TIME to ancient Japan(?), a place where they don't have any villains
from the comics or the cartoon. Some Japanese guys switch places with
them in the present to be baby-sat by Casey Jones, and
fish-out-of-water hilarity ensues (HA HA HA kill me). I actually have a
theory about this: I think someone dug through a bunch of crappy action
movie scripts, found one that would work with the Turtles and wrote the
Turtles into it. It's the only thing that makes sense to me.

Anyway, avoid this abomination at all costs. If it means anything to
ya, it ranks near the very bottom of my Worst Movies Ever list
(somewhere below The Cat In The Hat but just above Freddy Got
Fingered).