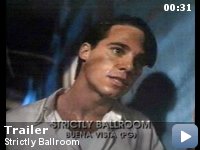 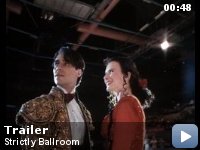 A maverick dancer risks his career by performing an unusual routine and sets out to succeed with a new partner.

Storyline
Scott Hastings is a champion caliber ballroom dancer, but much to the chagrin of the Australian ballroom dance community, Scott believes in dancing "his own steps". Fran is a beginning dancer and a bit of an ugly duckly who has the audacity to ask to be Scott's partner after his unorthodox style causes his regular partner to dance out of his life. Together, these two misfits try to win the Australian Pan Pacific Championships and show the Ballroom Confederation that they are wrong when they say, "there are no new steps!"

Taglines:
There's something in the air. It might be love — but it isn't.

The trophies in Kendall's Dance Studio were real trophies borrowed from dance studios.

Continuity:
When Fran's Grandmother is beating the rhythm on Scott's chest, the neckline on his undershirt goes up and down between shots

Barry Fife:
Well, of course, you can dance any steps you like! But that doesn't mean you'll…
[Slam into a close-up of Barry's mouth]

Yes, yes, I agree with all of the wonderful comments below, but here are a
few things nobody has mentioned:

1. The EDITING is superb. All too often we focus on the actors, music, or
cinematography. This is natural, and in this film all of these are superb.
But keep a close watch of the editing – wow, it is perfect and ties the
whole film together flawlessly. There are so many cuts that make the
perspective magical.(And no, I am not a film editor.)


2. Look at WHO is dancing together as couples, right at the end. This,
like so many other fine details, carries lots of significance.

3. When Scott and Fran are practising on the deck at her house, under the
instruction of her family, her Spanish father dances with her and says "Muy
bien, muy bien, Fran. Very good!" Notice that he uses her Anglo name "Fran"
rather than her Spanish name, and converts over to English. The look he
gives her tells us that he is probably seeing his (deceased) wife, via his
daughter whom he loves, and that he finally ACCEPTS her and her Anglo
boyfriend. This is but one of many small scenes that have more depth than
may be first apparent.

My wife and I grabbed this video to 'fill in time' during a quiet weekend.
We were astounded at how it captivated us since we had already seen it when
it first came out. Like other comments below, we have watched the end
repeatedly, and it always 'revs us up' into the clouds.
Bravo!