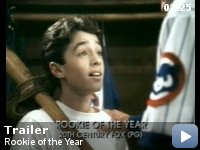 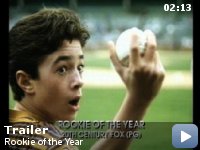 When an accident miraculously gives a boy an incredibly powerful pitching arm, he becomes a major league pitcher for the Chicago Cubs.

Storyline
12-year-old Henry Rowengartner, whose late father was a minor league baseball player, grew up dreaming of playing baseball, despite his physical shortcomings. Although he's close to his mother Mary, Henry hates Mary's latest boyfriend, Jack Bradfield. After Henry's arm is broken while trying to catch a baseball at school, the tendon in that arm heals too tightly, allowing Henry to throw pitches that are as fast as 103 mph. Henry is spotted at nearby Wrigley Field by Larry "Fish" Fisher, the general manager of the struggling Chicago Cubs, after Henry throws an opponent's home-run ball all the way from the outfield bleachers back to the catcher, and it seems that Henry may be the pitcher that team owner Bob Carson has been praying for. At first, Cubs manager Sal Martinella doesn't like Henry being on the team, but despite the rawness of his talent, Henry revives everyone's team spirit and reignites the enthusiasm of the fans…

Taglines:
The Chicago Cubs needed a miracle… They got Henry Rowengartner.

When Henry's mother (Amy Morton) is celebrating Henry scoring a run after being walked, she hits her head on the lamp hanging above her (at 57:42). Morton obviously didn't mean to do this: she is visibly hurt and after sitting down mutters "oh… shit" (at 57:46, which is dubbed out on the audio, you have to lip-read).

Revealing mistakes:
In the last game that Henry plays for the Cubs, the Cubs rally and score in their half of the fourth inning. In that inning a Cub player hits the ball and the announcer says "And Mullens lashes one into left!" when the brief close-up shot of the batter hitting the ball clearly shows (one frame at 01:19:33) the ball being hit to the right. The subsequent, longer shot shows the ball going near the third base line.

Henry Rowengartner:
Hey! We want a pitcher, not an underwear snitcher!

"Rookie of the Year" is one of my favorite baseball movies. One of the
things I liked the most about this movie is that it's set in Chicago, my
hometown. Most of the action in the film takes place at Wrigley Field, home
of the long suffering Chicago Cubs. It's about a clumsy 12-year-old boy
named Henry Rowengartner, who loves to play baseball. However, the kid can't
do anything right on the field. One day, trying to impress a girl, he tries
to catch a fly ball. But ends up slipping on a baseball lying on the ground
and in the process breaks his right arm. After four months of recouperation,
the cast comes off. Afterwards Henry's mother gives him and his two best
friends tickets to the latest Cubs game. The three boys are sitting in the
bleachers when a home run is hit. The ball lands close to where they're
sitting and one of Henry's friends recovers the ball. The fans sitting
nearby yell at the kid to throw it back on to the field. The kid doesn't
want to do it and gives the ball to Henry's other friend who ends up giving
the ball to Henry. He agrees to do it. Then an amazing thing happens. Henry
not only throws the ball back on to the field, he throws the ball all the
way to home plate! The crowd is in stunned silence after seeing this. Who
threw that ball? is the question on everyone's mind. When the owners find
out it's Henry, they ask him if he would like to pitch for the Cubs. Henry
goes bonkers and agrees to pitch. After throwing some practice pitches, the
owners and managers discover that he has a 100 m.p.h. fastball. They think
this could be the perscription the Cubs need since they're already going
through another disasterous season (which is all too familiar in real life).
Henry becomes the star rookie of the team as the closer. And the Cubs start
winning and begin to turn their season around. "Rookie of the Year" has alot
of big laughs and a terrific cast. There are four memorable performances in
this film. Thomas Ian Nicholas is wonderful as Henry. This actor has grown
up since this film (he was most recently seen in the hit film "American
Pie"), but he's in a role to remember; Gary Busey is also very good as the
aging star pitcher known as 'The Rocket' who helps out Henry in certain
spots; Albert Hall as the Cubs manager who repeatedly keeps mispronouncing
Henry's last name in different formats; and Amy Morton, a Chicago stage
actress, as Henry's mother Mary. Some of the most effective moments in the
film are with the boy and his mom. Also there are hilarious smaller
performances by Eddie Bracken as the Cubs owner; John Candy as the Cubs
broadcast announcer; and Daniel Stern (who also directed) in the film's
goofiest role as the dim-witted pitching coach. "Rookie of the Year" has the
usual predictable sports ending, but since this film is so much fun, who
cares. There is one obvious continuity error in the film. When they fly to
L.A. to play the Los Angeles Dodgers at Dodger Stadium, you can tell they're
really playing at Comiskey Park, home of Chicago's other baseball team, the
White Sox. You can tell just by that, that this film was shot entirely in
Chicago. "Rookie of the Year" is a baseball winner in my
book.