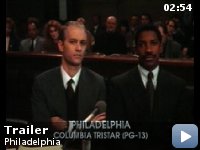 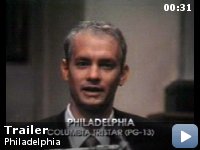 When a man with AIDS is fired by a conservative law firm because of his condition, he hires a homophobic small time lawyer as the only willing advocate for a wrongful dismissal suit.

Storyline
Andrew Beckett, a gay lawyer infected with AIDS, is fired from his conservative law firm in fear that they might contract AIDS from him. After Andrew is fired, in a last attempt for peace, he sues his former law firm with the help of a homophobic lawyer, Joe Miller. During the court battle, Miller sees that Beckett is no different than anyone else on the gritty streets of the city of brotherly love, sheds his homophobia and helps Beckett with his case before AIDS overcomes him.

Taglines:
No one would take on his case… until one man was willing to take on the system.

John Leguizamo turned down the part of Miguel.

Anachronisms:
The home video of older home movies at the end has sounds of the children playing baseball, at the beach, etc. Home movie cameras of that era didn't have sound. Sound cameras came out very shortly before camcorders became readily available.

Joe Miller:
Some of these people make me sick. But a law's been broken here. You do remember the law, don't you?

Philadelphia is about life, and making it matter.

Philadelphia is a guttingly emotional and tragic story of how a lawyer fired
for having AIDS attempts to vindicate himself in court. Tom Hanks gives
perhaps the most powerful performance of his career as Andrew Beckett, the
afflicted lawyer. He received the Academy Award in a waltz, and you could
almost pick any of his major scenes as worthy of the award.


This movie is probably the best drama regarding gay issues ever made.
Remember, it was made in 1993, when AIDS was still a terminal disease, and
it recalls the early days of an epidemic that may not square with the vision
afforded today, but at the time, this was the reality of AIDS.

The entire crew is A-List. Tak Fujimoto, who would also film Silence of the
Lambs and Sixth Sense, directed cinematography. Jonathan Demme, also of
Silence of the Lambs fame, directs with typical honesty and grit. Bruce
Springsteen and Neil Young contributed hauntingly touching original songs.
Even Antonio Banderas, whom I never miss an opportunity to vilify, is moving
as Hanks' devoted and supportive partner. Denzel Washington was well cast
as the homophobic lawyer who ultimately takes Hanks' case, and Mary
Steenburgen is surprising in an uncharacteristic villain
role.

Ron Vawter, who played one of the lawyers in the firm from which Hanks was
fired, and also appeared in Silence of the Lambs, was himself suffering from
AIDS at the time of filming, and he eventually succumbed to it a few years
later. His appearance in the film encapsulates the reality of the AIDS
epidemic, in that it often touched our lives in unexpected
places.

Although I have literally thousands of movies in my collection, I don't own
this one. Not because I don't love it. I do. It's because I can't watch
it without being overcome by emotion. Anyone who can watch Hanks' in the
Opera scene, or hear Springsteen's or Young's eerie and melancholy ballads
and not weep is dead inside. But in the end, Philadelphia is about life,
and making it matter.