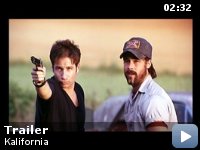 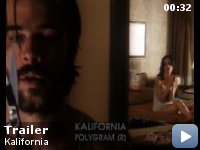 A journalist duo go on a tour of serial killer murder sites with two companions, unaware that one of them is a serial killer himself.

Storyline
Brian Kessler, a journalist researching serial killers, and his photographer girlfriend Carrie set out on a cross-country tour of the sites of the killings. Sharing the ride and their expenses are Early Grayce, a paroled white trash criminal, and his girlfriend Adele. As the trip progresses, Early begins to appear more and more unstable, and Brian and Carrie begin to fear that they may have a real-life killer in the back seat of their car.

Taglines:
A state of fear and terror

Early in the movie, when Carrie (Michelle Forbes) and Brian (David Duchovny) first see Early Grayce (Brad Pitt) and Adele Corners (Juliette Lewis), Carrie is heard complaining to Brian, "They look like a couple Okies." Brad Pitt was born in Oklahoma and grew up in Springfield, Missouri, which is located in an area of America referred to by its mountain range, the Ozarks. Rural, unsophisticated people from the Ozarks are often referred to as "Okies" rather than "hillbillies".

Continuity:
Towards the end of the movie, Brad and David are eating Chinese food. In one shot, you see David open his container and fold down the flaps and hold them this way. In the next shot you see him switch it with the other container on the table. When he switches it, the container he had just opened is now closed up.

Brian Kessler:
I'll never know why Early Grayce became a killer. I don't know why any of them did. When I looked into his eyes I felt nothing, nothing. That day I learned that any one of us is capable of taking another human life. But I also learned there is a difference between us and them: it's feeling remorse. Dealing with guilt. Confronting a conscience. Early never did.

Killer On The Road


It's a road movie, with a killer on-board. Brian Kessler (David
Duchovny), a sophisticated, urbane writer, wants to conduct field
research on American serial killers. But, neither he, nor his
girlfriend, Carrie (Michelle Forbes), has the money for a cross-country
tour of murder sites, so they advertise for someone to share travel
expenses. Who they end up with is a young couple, Early Grayce (Brad
Pitt) and his girlfriend, Adele (Juliette Lewis), two better examples
of "poor white trash" you will never find in all of cinema.


Indeed, Early and Adele are what make this film so entertaining, as
they babble, cackle, confide, muse, speculate, drool, and otherwise
behave in ways I haven't seen since reruns of "The Beverly
Hillbillies". Early's idea of California: "People think faster out
there, on account of all that warm weather; cold weather makes people
stupid". That's enough to convince Adele: "I guess that explains why
there are so many stupid people around here". To which Early responds
proudly: "It sure does". Early continues to instruct Adele about
California: "You never have to buy no fruit, on account it's all on the
trees … and they ain't got no speed limits, and I hear your first
month's rent is free, state law".

But poor Early has some, well, mental problems, which become ever more
obvious to Brian and Carrie as the four travelers proceed west across
the U.S. As they enter the desert Southwest, with its beautifully stark
landscape, "Kalifornia" starts to look more and more like "The Hitcher"
(1986), and Early starts to act more and more like John Ryder,
everyone's maniacal hitchhiker, whose terror seemed so unstoppable.

In "Kalifornia", the acting is uneven. Duchovny's performance is flat.
Brad Pitt is surprisingly effective, despite his overacting at times.
Michelle Forbes is great as the avant-garde, photographic artist. But
my choice for best performance goes to Juliette Lewis. With her nasal
voice and heavy-duty Southern accent, she is stunning, as the naive,
highly animated, child-like Adele.

Toward the end, the film takes on a Twilight Zone feel to it, as our
travelers enter a Nevada nuclear test site with a dilapidated old house
full of test mannequins. The plot dissolves rather messily into
unnecessary and preposterous violence, an ending that was somewhat
disappointing.

Overall, however, "Kalifornia" is an entertaining film, thanks to a
clever concept, great scenery, especially in the second half, good
cinematography, great dialogue, and that wonderful performance by
Juliette Lewis.