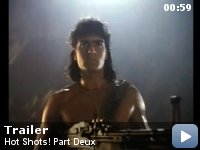 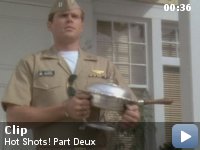 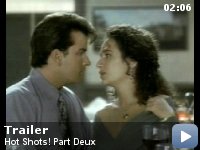 "Rambo" parody in which Topper Harley leads a rescue team into Iraq to save Iraqi war prisoners and all of their previous rescue teams.

Charlie Sheen worked out for eight hours a day to build up his body, as he decided that he would have felt embarrassed at the film's premiere if he had to sit amongst people laughing while looking at him on screen in a singlet.

Revealing mistakes:
When Topper jumps off the balcony after Saddam swings the sword at him, the stunt man's legs can be seen when Charlie gets up.

Col. Denton Walters:
It seems there were three bears. And one morning when their porridge was too hot, they went for a walk. And a little blond girl came skipping through the woods… she ate their porridge and she sat in their chairs… she slept in their beds. And when those bears returned and discovered that mess… Do you know what happened then Topper?

Topper Harley:
So you're saying is that little blond girl is me. If this is about me coloring my hair…


OK, let's get this clear; Hot shots IS silly. Silly, simple, stupid and
ABSOLUTELY pointless. But hey, it IS a slapstick comedy, and a *******
GREAT ONE! MUCH better than the first movie! In EVERY SECOND of the
movie there is a gag, a joke, or someone or something that is so damn
funny that I can't help myself from falling of the chair laughing like
hell! I think I've seen this movie over 20 times, It's still the
funniest movie ever for me. I guess when it comes to movies of this
kind, I just want them to be as stupid, with as many jokes per minute,
as possible. I think Charlie Sheen is perfect for this role, he does
look serious, like some kind of a bad Rambo-wannabe, and a
serious-looking person doing stupid things is always great. It's also
great that Richard Crenna plays almost the same character as in Rambo
3, with many of his lines unchanged. If you've watched the
Rambo-movies, (most important the third one), you'll get more of the
gags and the dialogs, especially in the scenes from the Buddhist
temple. Saddam Hussein is also excellent, he looks really like the real
one! If you like stupid and crazy movies…WATCH THIS!