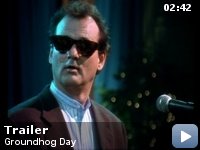 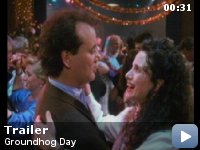 A weatherman finds himself living the same day over and over again.

Storyline
A weather man is reluctantly sent to cover a story about a weather forecasting "rat" (as he calls it). This is his fourth year on the story, and he makes no effort to hide his frustration. On awaking the 'following' day he discovers that it's Groundhog Day again, and again, and again. First he uses this to his advantage, then comes the realisation that he is doomed to spend the rest of eternity in the same place, seeing the same people do the same thing EVERY day.

Taglines:
He's having the day of his life…over and over again.

The scene where Bill Murray gets out of the news van and talks to the state trooper was filmed on the Amstutz Expressway under the Grand Avenue overpass just outside of downtown Waukegan, IL. You can see the Waukegan business district in some of the shots. The Amstutz Expressway was also used for the filming of the big chase scene in the
The Blues Brothers.

Revealing mistakes:
The north side of the plaza (filmed in Woodstock, Illinois) is shown when the insurance man appears. There is a store with a large "WOODSTOCK" sign, although the town is supposed to be Punxsutawney, PA.

Phil:
Somebody asked me today, "Phil, if you could be anywhere in the world, where would you like to be?" And I said to him, "Prob'ly right here – Elko, Nevada, our nation's high at 79 today." Out in California, they're gonna have some warm weather tomorrow, gang wars, and some *very* overpriced real estate. Up in the Pacific Northwest, as you can see, they're gonna have some very, very tall trees.

Much, much more than just a comedy

Taken as a light comedy, this movie would rate perhaps eight stars out of
ten. But it's much, much more than just a light comedy. It is, in fact,
utterly unique. The character of Phil Connors, played by Bill Murray, is,
quite literally, a man without a future.

What do we gain from watching this movie? Different people will take away
different things from it. I discovered two very important truths in
Groundhog Day.

One was the importance of concentrating on the things that last. Phil
Connors must live the same day over and over again, and is forced to
realize
that the only real change that will ever be possible must happen within
himself. (From this it is a short leap to the realization that this is the
only kind of change that really matters; for in his case, it is literally
true.) It is at this point that he takes up piano, begins reading, learns
to
ice-sculpt. But if it weren't for his unique predicament, he never would
have realized this; in his routine at the TV studio back in Pittsburgh, we
surmise, there was always something changing…and not changing. (It is
interesting that Phil is a weatherman: the weather is a perfect metaphor
for something that changes constantly…without, in the long term,
changing
at all.) We can be distracted by the superficial changes in the world
around
us, and forget that real change in our lives must come from within. This
was
the great gift of Groundhog Day for Phil Connors: the chance to discover
this truth for himself.

The other thing I noticed, while reflecting on this movie, is how
uncertainty can keep us from charitable acts. We use our ignorance like a
crutch: we don't give to charity because it may be a scam, we don't offer
to help someone because they may not need help anyway, and so on. But Phil
doesn't have the luxury of ignorance. He knows…he knows with absolute
certainty that if he doesn't buy the old man a bowl of soup, that man will
die in the streets within a few hours. He knows that if he isn't on hand
at
the right time, a boy will fall from a tree and break his neck. Faced with
such knowledge, even Phil, self-absorbed as he is, cannot stand by idly.
Nor
could we, in his position. This is a powerful argument for knowledge as
the
most reliable foundation for generous behavior. What other movie can offer
an insight half so profound?

Many more truths can be mined from this movie. As others have said, this
is
a thought experiment that went very well indeed–better than anything I've
ever seen on the Big Screen. As such, I'd vote for it as one of the
greatest
movies ever made, and very likely the most underrated movie ever
made.