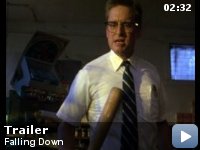 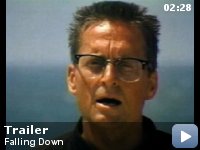 An unemployed defense worker frustrated with the various flaws he sees in society, begins to psychotically and violently lash out against them.

Storyline
William (D-FENS) just wants to get home to see his daughter on her birthday. Unfortunately, nothing seems to be going right for him. First there's the traffic jam, then the unhelpful Korean shopkeeper who "doesn't give change". D-FENS begins to crack and starts to fight back against the every day "injustices" he encounters on his journey home. The film has a story running in parallel about a desk-bound cop who is about to retire. He's retiring for his wife's sake, and obviously isn't happy about it. The cop tracks down D-FENS and in the final scene…..

Taglines:
A Tale Of Urban Reality

The kid who tells D-Fens how to use the rocket weapon could have learned the detailed instructions from watching
Beverly Hills Cop II.

Continuity:
At the drive-by shooting, the driver turns the wheel to the left to avoid crashing into another car, but the car turns to the right.

[In the Whammy Burger]

Bill Foster:
Why am I calling you by your first names? I don't even know you. I still call my boss "Mister", and I've been working for him for seven years, but all of a sudden I walk in here and I'm calling you Rick and Sheila like we're in some kind of AA meeting… I don't want to be your buddy, Rick. I just want some breakfast.

Sheila:
You can call me Miss Folsom if you want.

An important look at the decay of society

Falling Down is the kind of film that has much more more happening than
many of us want to know about. It is disguised simply as a film about
an apparent nut who goes out and tries to right the wrongs that have
been done to him and in his trek across Los Angeles he becomes an
anti-hero.


While that may be true to an extent, read more into it and you can see
a film that tries to show us that there is something terribly wrong
with how we live. I wasn't alive in the 50's, in fact, I was born in
the 70's. So I can't honestly tell you if life was easier back then.
But what I can tell you is that times were a bit more simple then. For
the most part, you had one income in the household. You had T.V and
radio as your entertainment and kids went outside to play. Now you must
have both parents working so you can have that double income. Kids are
obsessed with the internet and videogames and so on. What does all of
this have to with the film? Everything!

Falling Down is about the decay in one man's life and how it affects
not only him but those around him. There is one very powerful scene in
the film that can sum up everything.

There is a key moment in Falling Down that is sad in it's reality, but
true in it's opinion. Douglas is in a surplus store and the guy running
it is a Nazi sympathizer. When Douglass doesn't share his opinions,
they get into a confrontation. The guy snaps and tells Douglas to
spread against the wall. He obliges and then the Nazi guy wants to
handcuff him. He tells Douglas to give him his hand, he does. Then he
tells Douglas to give him his other hand. Douglas is supporting himself
on the wall in a 30 degree angle and if he gives the guy his other hand
" he'll fall down. " Which is precisely what he tells the Nazi guy.
This is a microcosm of the film and a microcosm of what may be wrong
with not only society but people in general. There is a theory in
wrestling that your arms and legs are like a table, if you take out any
two of the legs or arms, your opponent falls down and is vulnerable.
Same thing with a human being. Take away so many of his limbs ( job,
wife, dignity, credit rating, kids, etc. ) and it may be only a matter
of time before that person does snap. This movie shows us what happens
to one individual that does snap. He wasn't all that bad to begin with,
but as time went on and he was " lied " to, he can't handle it and
finally one day, he has had enough. I think this film is more important
than people realize and if you have only seen it once, see it again.
You may see something that you didn't see before. Hats off to
Schumacher and Douglas who had the guts to make this film.