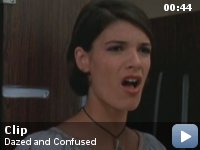 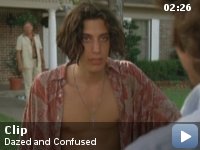 The adventures of incoming high school and junior high students on the last day of school, in May of 1976.

Storyline
It's the last day of school at a high school in a small town in Texas in 1976. The upperclassmen are hazing the incoming freshmen, and everyone is trying to get stoned, drunk, or laid, even the football players that signed a pledge not to.

The song that Milla Jovovich plinks on her guitar whilst gazing at the stars is an excerpt from The Alien Song, a song from Milla's 1994 album, The Divine Comedy.

Anachronisms:
When Mitch goes to purchase beer at the convenience store, a Coke dispenser with a logo first introduced in 1985 is visible.

A Time Machine Trip Back To The Texas Summer Of 1976


I graduated in 1976 from a high school in North Dallas and this entire
movie is so spot on it's scary. It is my favorite film. I've seen it
hundred's of times and every time it's like watching it for the first
time. Only someone that was there and lived through those days could
have directed such a movie. I drove a 70 dark blue Chevelle SS 454 with
a 4-speed, over 400 HP and all of the goodies Wooderson described.
Starting that car up, listening to the roar of that engine and burning
out in 1st gear while in a thick cloud of blue smoke in front of the
high school at 3PM while wasted……doing over 80MPH in 2nd gear….oh
yea! I feel sorry for the teenagers today that drive the limp wrist
fluffs of metal that pass themselves off as cars these days.

I was a stoner like Pickford smoking weed non-stop. Some mentioned that
the heavy drug use was not too common. Well, at our school it was
beyond common. Before school, during school (in the bathroom and
football field) and after school. Our school had a smoking area outside
the cafeteria where everyone went to light up.

The opening scene with Aerosmith "Sweet Emotion" slowly building up and
Pickford driving his Goat and girlfriend in the school parking lot
kills me every time. I cannot imagine a better opening scene for the
movie. That was pure genius. The funny thing is Linklater did not show
getting licks from the coach or the principal. For all the
"uninitiated" back then all a coach or an asst. principal had to say
was "Smith, I want to see you back at my office now". Our coach had a
paddle he personally made that he kept on his wall over his desk. It
had about 30 holes drilled in it and it was covered in black electrical
tape! When that one came down you knew it! Now with all the PC people
coach would go to jail for "assaulting the poor boy" Hell, back then it
was called character building. As I remember from the 7th grade on
licks were given out.

The soundtrack. Best ever. Might as well be back at White Rock Lake or
Lake Ray Hubbard on a Friday night getting wasted. Head East was a nice
touch. Every time I listen to that soundtrack I remember things I have
not thought about in 25 years. The man that portrayed Pickford's dad
was dead on. Accent, demeanor along with the big caddy and the tennis
playing wife in the mini-skirt and puffed up hair.

Some of the reviewers mentioned they did not think it was too realistic
showing/mixing a lot of sexual activity among the freshman girls. That
is another point I must dispute. Maybe at their school in their town of
500 or their strict upbringing but at our junior high and high school
the freshman and younger girls were pretty wild. I mean really "wild"!
This is coming from someone who "lost it" at 12. So insinuating things
about a 15 or 16 year old freshman is pretty tame. 15 and 16 year old's
were the "world travelers" to us 13 or 14 year old guys.

There is something about this movie that pulls me back over and over
again. It's hard to describe. I'm not sure what it is. Am I a Wooderson
that enjoys reminiscing? Am I someone that prefers simpler times? Am I
someone that is so sick of PC people that a movie like D&C is like a
breath of fresh air? Was there something magical in the air back in
1976? The country was celebrating 200 years of freedom. Now within the
last 30 years it seems that most of those freedoms have been slowly
whittled away with and all that is left is a former shell of the old.
Especially after 2001.

The best scene? To me it's a toss-up between the opening "Sweet
Emotion" GTO in the school parking lot and the Emporium scene with
"Hurricane" playing in the background while (The Past) Wooderson, (The
Present) Pink and (The Future) Mitch walk into the Emporium while the
camera films every little nuance in slow motion. The cockiness of
Woods, the mellow Pink and the innocence of Mitch. Put that scene on
slow motion and study their faces and the reaction shots of their
peer's faces as they acknowledge their presence.

Your own personal time machine if only for an hour and a half. Slip the
DVD in, turn the lights down low, take a couple good strong hits and
wash them down with a few Tallboys. Use your imagination and for the
briefest of time you are back in 1976. I wish they made more movies
like this instead of the sugar coated pablum coming out of Hollywood
nowadays.

If you do then Dazed and Confused is right up your alley. If you don't
then still watch it, the characters in D&C cover all generations, just
the cars and clothing have changed.