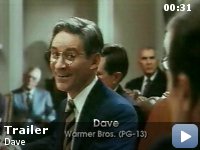 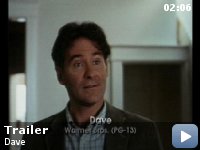 To avoid a potentially explosive scandal when the U.S. President goes into a coma, an affable temp agency owner with an uncanny resemblance, is put in his place.

Storyline
Bill Mitchell is the philandering and distant President of the United States. Dave Kovic is a sweet-natured and caring Temp Agency operator, who by a staggering coincidence looks exactly like the President. As such, when Mitchell wants to escape an official luncheon, the Secret Service hires Dave to stand in for him. Unfortunately, Mitchell suffers a severe stroke whilst having sex with one of his aides, and Dave finds himself stuck in the role indefinitely. The corrupt and manipulative Chief of Staff, Bob Alexander, plans to use Dave to elevate himself to the White House – but unfortunately, he doesn't count on Dave enjoying himself in office, using his luck to make the country a better place, and falling in love with the beautiful First Lady…

Taglines:
Dave Kovic was an ordinary guy who was asked to impersonate the President. When they gave him a chance to make the country better…he did.

The House of Delegates Chamber in the State Capitol building in Richmond, VA doubled for the House Chamber of the U.S. Capitol in Washington, DC. While the movie was being filmed, many members of the Virginia House of Delegates and visitors to the Capitol that day were used as extras.

Factual errors:
When Dave calls the Joint Session of Congress, none of the US Supreme Court Justices are present. They would be seated at the front of the chamber dressed in their robes. For none of the 9 judges to attend such an important Presidential address would be unthinkable.

Girl at Durenberger's:
[at the domestic cars convention]
Mommy, that's not really the President, is it?

Mom at Durenberger's:
I sure hope not!

This film just has greatness written all over it! First you have a great
director, Ivan Reitman, then you have a slew of great actors: Kevin Kline,
Sigourney Weaver, Frank Langella, Kevin Dunn, Ving Rhames, Ben Kinsley,
Charles Grodin and Laura Linney. All the actors did a great job in this
film. The film is sometimes funny, and sometimes touching. It's all very
well done in this film. The story is a very interesting one, and not too
terribly far-fetched.

There really isn't much to say other than if you like any of these actors or
director above, then you should probably see this film. Or, if you think
you'd like a little comedy/drama, then check it out. I really enjoyed this
film and I hope you will as well. Thanks for reading,