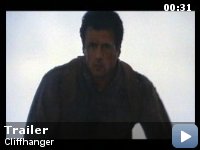 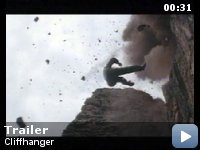 A botched mid-air heist results in suitcases full of cash being searched for by various groups throughout the Rocky Mountains.

Storyline
Whilst crossing a ledge, 4000 feet above the earth, Gabe's friend's equiptment fails to work and she slips out of his hand, falling to the ground. Almost a year later, Gabe is asked to go back to the same mountain range and rescue a group of 'stranded' people. The only catch is that these so called 'stranded' people are infact looking for three boxes filled with $100,000,000 and they need mountain ranger to lead them to them!!

Paramount was forced to pay out an additional $750,000 to three separate writers who were all claiming credit for the story.

Continuity:
The plane crashes in the mountains, and appears to have stopped half way off a cliff. When people leave the plane, the plane is fully on the ground.

Gabe Walker:
I've been working up in Denver.

Evan:
Man, I hate work. Even when somebody else is doing it.


I don't think I'll ever understand the hate for Renny Harlin. 'Die Hard
2' was cool, and he gave the world 'Cliffhanger', one of the most
awesome action movies ever. That's right, you little punks,
'Cliffhanger' rules, and we all know it.


Sly plays Gabe Walker, a former rescue climber who is 'just visiting'
his old town when he is asked to help a former friend, Hal Tucker
(Michael Rooker), assist in a rescue on a mountain peak. Walker
obviously came back at a convenient time, because the stranded people
are actually a sophisticated team of thieves led by Eric Qualen (John
Lithgow). Qualen & co. have lost a whole lot of money they stole from
the U.S. government somewhere in the Rocky Mountains and they really
would like it back…

Essentially, 'Cliffhanger' is another 'Die Hard' clone. Just trade in
the confines of Nakatomi Plaza to the open mountain ranges of the Rocky
Mountains, complete with scenes created to point out the weaknesses of
our hero and keep him mortal. Naturally, that set up is totally ripped
to shreds soon enough, as Stallone's character avoids quite a large
number of bullets with ease, and slams face-first into several rock
faces with no apparent side-effects. After all, isn't that what action
movies are all about?

'Cliffhanger' is one of the most exciting action movies around. A
showcase of great scenes and stunts. One of the early stunts is one of
the best stunts I've ever seen in a movie, and while the rest of the
movie does not get any better than it did at the beginning, it
maintains its action awesomeness. John Lithgow's lead villain is
entertaining, and one bad dude. Quite possibly one of the coolest lead
villains ever.