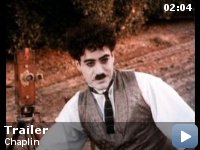 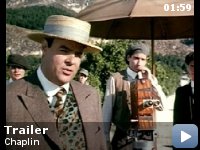 A film about the troubled and controversial life of the master comedy filmmaker.

Storyline
The biography of Charlie Chaplin, filmmaker extraordinaire. From his formative years in England to his highest successes in America, Charlie's life, work, and loves are followed. While his screen characters were extremely hilarious, the man behind "The Little Tramp" was constantly haunted by a sense of loss.

Taglines:
Everyone has a wild side. Even a legend.

John Goodman and Winona Ryder were attached to this project at one time.

Audio/visual unsynchronized:
When Charlie's brother and others arrive to whisk Charlie and his unedited film away to Utah, the car screeches to a halt. However, the car is on a dirt track and therefore no screeching noise would actually be created.

George Hayden:
Ha ha ha ha ha. Come on Charlie stop messing about, we really have to get down to it now. I just hope our friendship survives the day, that's all.

George Hayden:
Well it's your autobiography Charlie. And as your editor I have to tell you that parts of the manuscript are pretty vague, to say the least. I mean for instance, your mother. Now when did she first loose control? We need to know those facts.

Charlie Chaplin:
It's hard to say. She could be so wonderful, on good days…

A spectacular portrayal of the unseen life of Charlie Chaplin.

Robert Downey Jr., first of all, portrays Chaplin with amazing accuracy.
Some parts of this performance are particularly memorable, such as his
invention of the famous tramp's walk just after having feverishly picked out
the outfit, the astonishingly accurate depiction of Charlie as an old man,
and of course, the many parts of the film that involve parts of his life
where he was working on his own films. These are clearly some of the most
interesting parts of the movie, if only because these films are how we know
him, but it is at least as interesting the way that the film hints towards
things that happened in Chaplin's life that inspired those films.

Very early in the film, we see a scene in which Charlie's mother is booed
off the stage by an impatient crowd, so Charlie, who is a little boy at the
time, gets on stage to do a song and dance of his own. He performs a song
that is very similar to the one his mother performed, but he wins the
audience's heart and they respond by tossing coins onto the stage for him.
You can't help noticing how this corresponds with the constantly youthful
look of the Tramp (in Modern Times, for example, Chaplin was in his late 40s
but looked like a teenager), and the coins tossed on stage may have played a
significant role in helping him realize that this could be a good way to
make money.

Charlie moves to America to pursue his dream, and we see the landmark events
that punctuated his dizzying rise to stardom. He goes to work briefly on
stage and is then hired by Mack Sennett, a gigantic figure in film history,
but is unsatisfied because of his own lack of control over his work. It
should also be noted here that there is a scene where he is working with
director Mabel Normand, who demands acting from him that he does not agree
with, and with whom he clashes. In 1914, Chaplin starred in a 9 ½ minute
film called Mabel's Busy Day, in which he plays the uncharacteristic role of
the antagonist. The Mabel in this film is a sporting event vendor who turns
down Charlie's amorous advances, after which Charlie proceeds to steal all
of her products and hand them out to anyone standing nearby. Then in 1920,
he starred in another short comedy called Mabel's Strange Predicament, in
which Mabel is a woman who becomes locked out of her hotel room in her
pajamas and ends up avoiding the drunken Charlie for the rest of the film.
In both films, Charlie plays uncharacteristic roles, the most unenviable of
which was in Mabel's Busy Day, which Mabel Norman directed.

Later in the film we see Charlie in a small diner just after having
terminated his employment with Mack Sennett, and he meets Edna Purviance in
a scene that is reminiscent of his romantic endeavors in such early films as
Caught In A Cabaret and, even more so, The Immigrant, one of his most famous
early films. There are dozens of other references to the development of his
cinematic personality – such as his sudden realization of how to make the
Tramp appear rich to the blind girl in City Lights without talking, as well
as the dance of the dinner rolls, which Charlie performs here at a dinner at
an expensive restaurant – but there is an even more significant portrayal of
Charlie's beliefs and his values in this movie that are more recognizable as
well as more memorable to people not familiar with his earlier and less
known work.

Charlie Chaplin was one of many filmmakers' in the earlier times of the
medium that resented and disapproved of the coming of sound to the movies.
His Tramp remains one of the most recognized figures in the history of the
cinema, and it is widely known that the Tramp is an almost entirely silent
character, so it is necessary for a film about Chaplin's life to address
this in some way, and it is done perfectly here. There is a scene where
Charlie's brother is trying to convince him to add spoken dialogue into his
films and Charlie refuses outright, giving a hilarious example of a Russian
ballet dancer and saying, `The Tramp CAN'T talk. The minute he talks, he's
dead.' This is a brilliant way to illustrate Charlie's fondness for the
silent film, as well as his knowledge that no voice given to the Tramp would
fit his character right. He was too well known to be changed so profoundly.

Charlie Chaplin created 81 movies in his lifetime, many of them timeless and
truly memorable, and has made a significant impact on the filmmaking medium
as well as on the world itself. He was a fascinating personality both
onscreen and off, which is another element of his life that was necessarily
and skillfully presented in this film, this time directly in the dialogue in
what is probably the single most important line in the entire film – `If you
want to understand me, watch my movies.' Chaplin's ever-present sympathy for
the underprivileged is subtly but effectively portrayed as two poor people
approach him on his way out of a nice restaurant, right at the beginning of
the Great Depression, asking for his autograph. The elderly Charlie notes in
retrospect that, `I wish they'd wanted my money.'

He is always aware throughout the film and throughout his life of the
difficulties constantly facing poor people, and he wants to give these
people not only an escape with his films, but hope for the future. There is
a point in the film where Charlie has returned to Europe to see an old
friend, and he learns on the train that she has died. He is then asked,
`What'll we do, Charlie?' And his answer, although spoken under his breath
almost in a whisper, rings louder than anything else in the
film.