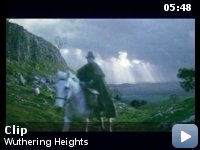 Heathcliff is Cathy Earnshaw's foster brother; more than that, he is her other half. When forces within and without tear them apart…

Storyline
Heathcliff is Cathy Earnshaw's foster brother; more than that, he is her other half. When forces within and without tear them apart, Heathcliff wreaks vengeance on those he holds responsible, even into a second generation.

Taglines:
A passion. An obsession. A love that destroyed everyone it touched.

Ralph Fiennes insisted on keeping a scene from the book in which Heathcliff bangs his head against a tree, pining for Cathy. He did it so sedulously, that he drew blood.

Heathcliff:
Why did you betray your own heart, Cathy? You loved me. And what right had you to leave me? The poor fancy you felt for Linton? Nothing that God or Satan could inflict would have parted us. You of your own will did it. I've not broken your heart Cathy, you have broken it. And in breaking it, you've broken mine.

The best adaptation of Wuthering Heights that I've seen.

Having been fascinated by the Brontes for several years and growing up in
Yorkshire, I've longed to see a faithful adaptation of Wuthering Heights for
a long time. Why it's taken me so long to see this version I don't know!

I just watched this film tonight and I'm left shattered by it. It is
stunning. It's probably a sacrilege to some to say that I thought the 1939
version with Laurence Olivier was awful, but there it is. That was
saccharine and gave no hint as to the darkness of the original novel. This
version, however, recaptures all that darkness and torment and shatters your
soul with it.

Ralph Fiennes is an astonishing Heathcliff. Capable of tenderness but torn
apart by what he can't have all for himself. The chemistry between him and
Juliette Binoche is electrifying – Heathcliff and Cathy were born to be
together and to see them almost forced apart by each of them failing to be
true to their heart well.. it breaks YOUR heart. The poetic dialogue with
Heathcliff and Cathy on the moors and the movie score complements this
perfectly.

Supporting roles are also solid especially the actress who played Ellen
Dean and an interesting cameo by Sinead O Connor as Emily Bronte! The only
complaint I could make about this film is that it's not long enough! Years
seem to fly by far too quickly and we barely get an insight into why Cathy
and Heathcliff's souls are intertwined. However, what we DO see is stunning.