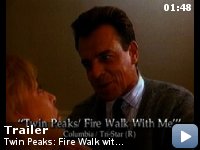 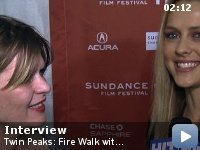 A young FBI agent disappears while investigating a murder miles from Twin Peaks that may be related to the future murder of Laura Palmer; the last week of the life of Laura Palmer is chronicled.

Storyline
Essentially a prequel to David Lynch and Mark Frost's earlier TV series "Twin Peaks". The first half-hour or so concerns the investigation by FBI Agent Chet Desmond (Chris Isaak) and his partner Sam Stanley (Kiefer Sutherland) into the murder of night-shift waitress Teresa Banks in the small Washington state town of Deer Meadow. When Desmond finds a mysterious clue to the murder, he inexplicably disappears. The film then cuts to one year later in the nearby town of Twin Peaks and follows the events during the last week in the life of Laura Palmer (Sheryl Lee) a troubled teenage girl with two boyfriends; the hot-tempered rebel Bobby Briggs (Dana Ashbrook) and quiet biker James Hurley (James Marshall), her drug addiction, and her relationship with her difficult (and possible schizophrenic) father Leland (Ray Wise), a story in which her violent murder was later to motivate much of the TV series…

Taglines:
Meet Laura Palmer… In a town where nothing is as it seems… And everyone has something to hide.

Robert Engels claims the script that he and Lynch wrote is much longer than the version that Lynch actually filmed. He claims there is enough story for a sequel. Indeed, as with many other Lynch films, about five hours of footage was shot. Many of the scenes that ended up on the cutting room floor involved characters who appeared in the television series but not in the movie. These scenes include – Sheriff Harry Truman singing to girlfriend Josie Packard – Johnny Horne's birthday party – Bobby Briggs' parents reading from the Bible – Doc Hayward performing magic tricks – a fight scene between FBI Agent Chester Desmond and Sheriff Cable.

Donna:
Do you think that if you were falling in space… that you'd slow down after a while, or go faster and faster?

Laura:
Faster and faster… until after a while you wouldn't feel anything… and then your body would just burst into fire. And the angel's wouldn't help you, 'cause they've all gone away…


By the time this film was released, critics and TV audiences had
already decided its decidedly mediocre box-office fate. The usual
network attitude toward anything which demands thought and
interpretation assured the cancellation of the series in its second
season, and Lynch's departure from the show's director's chair to begin
this film project all but sealed the fate of the show. Unfortunately,
this same fate determined both the critical and public approach to the
film project.


TP:FWWM is a prequel to the two-season Twin Peaks saga, and (sort of)
answers the question 'how and why did Laura Palmer die?'. Fans of the
show mostly knew the answers before they saw this film, but to see
Laura's life so vividly realized, and to see the TV characters cast
into such a different, more harsh, surreal and disturbing light, really
invigorates the entire TP phenomenon. FWWM actually inspired me to
watch the entire series again (and as of 2004, I am in the process of
watching it again). Fans of the series who found themselves
disappointed by the final few episodes of the series because they felt
it became too bizarre, are likely to find this film more gripping,
though they will probably end up as unsatisfied as they were at the
onset. Those who found the second season thrillingly experimental are
likely to be surprised by the subtlety of and dramatic quality of this
film. Those, like me, who approach the film with few tangible
expectations might just find themselves, compelled, disturbed, and very
entertained.

The performances are generally very good, but not entirely even. Some
TV cast-members, given the vastly expanded possibilities of cinema,
really showed their range and depth. Sheryl Lee, MacLachlan, Dana
Ashbrook, and Ray Wise were especially impressive. The cinematography
is less powerful than the usual Lynchian vision (see Eraserhead, Lost
Highway for extreme examples), and is more in keeping with the TV
show's straightforward, but moody, photographic approach. The overall
production values are, in fact, comparable to those of Mulholland Drive
– also originally planned by Lynch as a TV show. Though more subtle
than many of Lynch's more extravagant works, TP:FWWM is very
successfully manipulative and powerful.

I ardently appreciate Lynch, considering him one of cinema and
performance's greatest contemporary artists. And I am unashamed to
state that I believe this to be among his finest works. Many of Lynch's
fans love to write interpretations of Lynch himself, as if all of his
films are in some way connected beyond the obvious fact that he
directed (and more often than not scripted) them. I do not disagree
with this approach, but, in my opinion, any such universalizing
comments more or less miss the point. Lynch is one of many director's
who view film as an art form, not as a craft, nor as a vehicle for
specific messages and stories. As Lynch has stated, repeatedly, his
films involve a dream-like reality and often attempt to invoke a dream
or nightmare state in viewers. Unlike most, however, Lynch succeeds in
the purity of his art. His films demand interpretation, engagement and,
what's more, demand a different and unique interpretation by most who
view them.

If you are looking for something which can be universally interpreted
from TP:FWWM as part of this imagined set of Lynchian themes, I am not
the reviewer to give it, look elsewhere. I have too much respect for
Lynch's artistry to subject him to my own interpretive explanations.

If you are looking for a simple story which will clear up the insanity
of Twin Peaks, don't bother with FWWM.

If you are looking, open-mindedly, for an intense, disturbing, and well
constructed cinematic experience which creates more questions than it
answers, and retains elements of mystery in a fatalistically driven
plot environment, you've come to the right place.