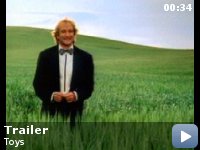 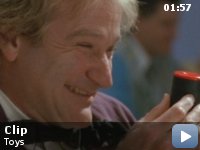 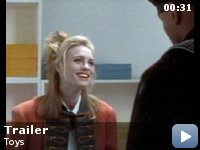 When a military general inherits a toy making company and begins making war toys, his employees band together to stop him before he ruins the name of Zevo Toys forever.

Storyline
An eccentric toymaker's last wish is that his brother takes over the running of the business. The brother is a military General, and is out of touch with toymaking, and out of touch with reality too. The business should really have been given to Leslie, who was much more like his toymaking father. When the General starts making weapons instead of toys, Leslie decides to take action.

Taglines:
Laughter is a state of mind.

The blue car that Leslie drives is a very rare 1950 Muntz Jet, of which less than 400 were made.

Crew or equipment visible:
At the end of the film when the Zevo tombstone (stone elephant) is flying through the air, the wire carrying the elephant is clearly visible.

One of the most underrated movies of all time


It's hard to think of a movie that divides its audience as deeply as
"Toys" does. Few people will say this movie is "fair." Instead, people
often call it the best movie ever made or the worst… and they mean
it!


Even its severest critics grudgingly admit that it's visually stunning
and has perhaps the best soundtrack of the decade ("Happy Worker" is a
classic, and "At the Closing of the Year" is, in my opinion, the best
Christmas song written in the past 30 years). It's clearly Oscar-worthy
in the categories of music and set design.

Most people who've seen it agree that Joan Cusack's quirky
characterization is wonderful and that the vignettes provided Robin
Williams with a springboard for some of the best ad libs of his career.
And the story, a whimsical fable of innocence versus corruption, is as
unlikely to give offense as any you can name. So, you'd expect the
movie's critics to say "I didn't care for it," instead of "Everyone
associated with this movie should be ashamed!"

When I like something and others don't, I hesitate to say they don't
"get it," but in the case of "Toys," it really is true. It's no
coincidence that many visual references to the work of Rene Magritte
keep popping up. "Toys" is a surrealist movie, and like any work of
surrealism, it has a simple veneer over a more sophisticated message,
one that defies explanation and works on the level of a dream. This
movie is more "Mulholland Drive" than "Willie Wonka."