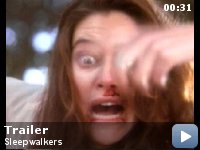 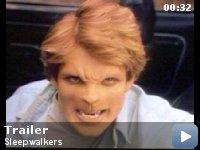 A mother-and-son team of strange supernatural creatures come to town to seek out a virgin to feed on.

Storyline
Charles Brady and his mother Mary move to a small town. They are sleepwalkers – they can change their appearance and they need the life force from young women. Charles has picked out young Tanya as his next victim. He asks her for a date and invites her home…

Errors in geography:
The mountains of California are everywhere in this movie, yet it supposedly takes place in rural Indiana, one of the flattest states in the U.S.

Captain Soames:
Look, you got one hysterical girl with a very vivid imagination and all that girl needs is a good smack on the butt and her mommy and daddy won't do it, I'll be happy to volunteer.

As Much as I Want to Hate This Film, I Love It


A shape shifting young man (Brian Krause) and his mother (known as
"sleepwalkers" for some reason) arrive in a new town. But the mother
(Alice Krige) needs to feed, so her son Charles must find him a pure
young woman. But who will he love more, his mother or the beautiful
Tanya Robertson (Madchen Amick)? "Sleepwalkers" is a film that has a
special place in my heart. I saw it repeatedly on television as a
teenager watching our local horror host, Ned the Dead. And while I
never thought it was great, I found it entertaining. I place it in the
same category as "Maximum Overdrive" — cheesy and fun, though by no
means a great film. And look at the cameos in this film! Mike Mayo
tears this film apart, calling it "arguably King's worst film". He says
the "script meanders through pointless chitchat scenes." Director Mick
Garris "doesn't know how to photograph" and throws in "close-ups of
knees." Wow. He has nothing nice to say about this film, giving it a
dismal 0 on his one through four scale. I must beg to differ with Mike
on this one.

First of all, King's worst film is "Langoliers". Second, I did not
notice these pointless chitchat scenes he speaks of. Some of the plot
is a bit loose, but nothing is completely pointless. I furthermore do
not recall any shots of knees, though if the knees belonged to the
beautiful Madchen Amick I think this is forgivable. Mick Garris has
made many a bad film, this is true. And "Sleepwalkers" is by no means a
masterpiece. But I think to lay down such heavy scorn is misplaced and
really ignores the "fun factor" of this picture.

Oddly enough, Howard Maxford, whom I almost never agree with, seems to
get this one. He calls the film "silly but quite lively" and points out
the "nifty effects" and "gag cameos" (Stephen King, Clive Barker, Joe
Dante, Tobe Hooper and John Landis). And there you go — recognition of
the fun this film was and still is.

Ron Perlman ("Hellboy", "Pro-Life") plays a cop and doesn't get nearly
enough screen time. Not sure what else to say about that. Clearly they
did not foresee the star power in Perlman.