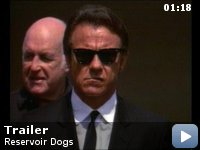 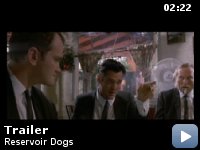 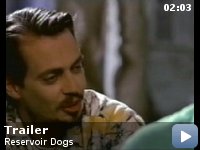 After a simple jewelery heist goes terribly wrong, the surviving criminals begin to suspect that one of them is a police informant.

Storyline
Six criminals, who are strangers to each other, are hired by a crime boss Joe Cabot to carry out a diamond robbery. Right at the outset, they are given false names with an intention that they won't get too close and concentrate on the job instead. They are completely sure that the robbery is going to be a success. But when the police show up right at the time and the site of the robbery, panic spreads amongst the group members and one of them is killed in the subsequent shootout along with a few policemen and civilians. When the remaining people assemble at the premeditated rendezvous point (a warehouse), they begin to suspect that one of them is an undercover cop.

Taglines:
Every dog has his day.

Quentin Tarantino and his producer Lawrence Bender used to joke that they were the most inexperienced people on the set. They were probably right.

Errors made by characters (possibly deliberate errors by the filmmakers):
In the beginning diner scene, after Mr. Pink finally puts a dollar in for the tip, they all get up and start to walk away from the table. Nice Guy Eddie leaves his "brick" cell phone on the table.

Mr. Brown:
Let me tell you what 'Like a Virgin' is about. It's all about a girl who digs a guy with a big dick. The entire song. It's a metaphor for big dicks.

Mr. Blonde:
No, no. It's about a girl who is very vulnerable. She's been fucked over a few times. Then she meets some guy who's really sensitive…

Joe:
Toby… Who the fuck is Toby? Toby…

Mr. Brown:
'Like a Virgin' is not about this sensitive girl who meets a nice fella. That's what "True Blue" is about, now, granted, no argument about that.

Mr. Orange:
Which one is 'True Blue'?

Nice Guy Eddie:
'True Blue' was a big ass hit for Madonna. I don't even follow this Tops In Pops shit, and I've at least heard of "True Blue".

Mr. Orange:
Look, asshole, I didn't say I ain't heard of it. All I asked was how does it go? Excuse me for not being the world's biggest Madonna fan.

Mr. Blonde:
Personally, I can do without her.

Mr. Blue:
I like her early stuff. You know, 'Lucky Star', 'Borderline' – but once she got into her 'Papa Don't Preach' phase, I don't know, I tuned out.

Mr. Brown:
Hey, you guys are making me lose my… train of thought here. I was saying something, what was it?

Joe:
Oh, Toby was this Chinese girl, what was her last name?

Joe:
I found this old address book in a jacket I ain't worn in a coon's age. What was that name?

Mr. Brown:
What the fuck was I talking about?

Mr. Pink:
You said 'True Blue' was about a nice girl, a sensitive girl who meets a nice guy, and that 'Like a Virgin' was a metaphor for big dicks.

Mr. Blue:
How many dicks is that?

Mr. Brown:
Then one day she meets this John Holmes motherfucker and it's like, whoa baby, I mean this cat is like Charles Bronson in the 'Great Escape', he's digging tunnels. Now, she's gettin' the serious dick action and she's feeling something she ain't felt since forever. Pain. Pain.

Mr. Brown:
It hurts her. It shouldn't hurt her, you know, her pussy should be Bubble Yum by now, but when this cat fucks her it hurts. It hurts just like it did the first time. You see the pain is reminding a fuck machine what it once was like to be a virgin. Hence, 'Like a Virgin'.

Reservoir Dogs is a testament to the idea that "less is more." This doesn't
apply to the violence, the film is extremely violent from beginning to end,
but the details of the botched diamond heist, which the entire film is based
on, are conveyed only in the dialogue, except for one scene where Mr. Pink
(Steve Buscemi) recalls his escape. The whole film takes place after the
failed robbery is over, and the mystery that unfolds among the criminal
participants is amazing to watch.

This is not a normal crime film. The thing that really sets Reservoir Dogs
apart from all of the others is that it is PURE. When you look at the
screen, you're looking at reality. There are no Hollywood actors, there's no
make-up to make them look pretty, there's little to no comic relief, and
most important of all, there's no goofy romantic subplot clumsily thrown in,
a detrimental trademark of so many action films, as well as virtually all
Jerry Bruckheimer films. Instead of all of that garbage, Tarantino decided
to just present the film as simply and straightforwardly as possible, and by
doing that he makes it seem that you're really looking at a bunch of
criminals trying to figure out what to do after a suspiciously failed
robbery.

Even though most of the actors were known at the time this film was made,
the film was delivered in such a way that you don't see the actors at all,
you only see the brutal characters that they portray. It is genuinely
frightening to imagine being in the same room with any of them, and this is
a quality that is rarely achieved in any kind of film.

Make no mistake, Reservoir Dogs is among the most violent films ever made,
and some scenes are really painful to watch, but the way that reality is
captured is something that justifies the violent excesses in this film. The
violence is never glorified, nor is the criminal lifestyle. When films are
overly violent, they usually get branded as such, but despite the extreme
violence, Reservoir Dogs still manages to deliver an important overall
message about the consequences of your actions. It remains high on the
growing list of Tarantino's classic films, and it will not be soon
forgotten.