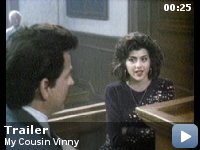 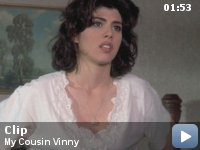 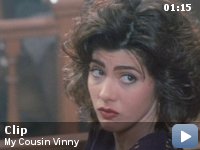 Two New Yorkers are accused of murder in rural Alabama while on their way back to college, and one of their cousins–an inexperienced, loudmouth lawyer not accustomed to Southern rules and manners–comes in to defend them.

Storyline
Bill Gambini and Stanley Rothenstein are 2 friends from New York University that just received scholarships to UCLA. They decide to drive through the south. Once they arrive in Alabama, they stopped at a local convenience store to pick up a few snacks. But, no sooner that they left the store, they were arrested. They had thought that they were arrested for shoplifting, but they were arrested for murder and robbery. Plus, they are facing execution for this crime. Bill and Stan do not have enough money for a lawyer, good news, that Bill has a lawyer in his family, his cousin, Vincent Laguardia Gambini. Bad news, is that Vinny is an inexperienced lawyer who has not been in a trial. So, Vinny has to defend his clients and battle an uncompromising judge, some tough locals, and even his fiancée, Mona Lisa Vito who just does not know when to shut up, to prove his clients' innocence. But he will soon realize that he is going to need help.

Taglines:
A Comedy Of Trial And Error

When Vinny is talking to Judge Haller (actor Fred Gwynne) for the first time, Vinny looks up and sees Judge Haller's Yale Law School diploma. Fred Gwynne is in fact a Harvard alum.

Vinny Gambini:
Is it possible the 2 defendants…
[looks at judge]

Vinny Gambini:
went into the Sac-O-Suds, picked 22 specific items off of the shelf, had the clerk take the money, make change, then leave. Then 2 different men, drive up…
[Seeing Mr. Tipton shake his head no]

Vinny Gambini:
Don't shake your head I'm not finished yet. Wait until you hear the whole thing you can understand what it is that I'm askin'. Then, two different men drive up in a similar looking car, do into the store, shoot the clerk, rob him, then leave?

Mr. Tipton:
No. They didn't have enough time.

Vinny Gambini:
Why not? How long was they in the store for?

Vinny Gambini:
5 minutes? How do you know? Did you look at your watch?


My Cousin Vinny is one of the most brilliant comedies ever produced.
There is simply so much to love about this movie.

First, this is not simply a slapstick comedy. Sure, there is some of
that, including a few hilarious moments in the Alabama mud. But the
dialogue in this film is terrifically funny. The writers were able to
turn a courtroom script into an incredibly funny exchange of dialogue
between lawyers, judges and witnesses. And the whole idea of an
out-of-work hairdresser knowing about Positraction is simply brilliant.

This dialogue is brilliant because of excellent performances by both
Marisa Tomei and Joe Pesci. These two sell this whole load of nonsense
so beautifully it should be mandatory viewing for first-year drama
students. These two actors show how talented people can read
practically anything and make it not only funny but wholly believable.

Even all the side characters, from the judge to the D.A. to the
defendants to the jury and witnesses are brilliantly played. Some of
the exchanges between a local Alabama judge and a NYC poser lawyer
would be completely ridiculous in anyone else's hands, but these people
make it so real and so funny it's truly a thing of beauty.

This is one of those rare films that I can watch over and over again
for hours and not tire of it.