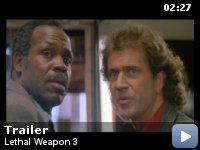 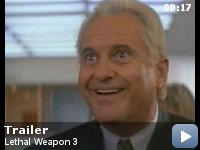 Martin Riggs finally meets his match in the form of Lorna Cole, a beautiful but tough policewoman. Together with Roger Murtaugh…

Storyline
Martin Riggs finally meets his match in the form of Lorna Cole, a beautiful but tough policewoman. Together with Roger Murtaugh, his partner, the three attempt to expose a crooked former policeman and his huge arms racket. The crooked cop (Jack Travis) thwarts them at every turn, mainly by killing anyone who is about to talk, but Murtaugh has personal problems of his own as his family are brought into the equation.

Taglines:
The magic is back again!

Crew or equipment visible:
Steadicam and operator visible when Riggs' motorcycle falls from the highway.

[during a fight, Lorna grabs a man's crotch, making Murtaugh and Riggs wince]


Los Angeles police sergeant Roger Murtaugh and his partner, Sergeant
Martin Riggs, arrest Billy Phelps for trying to rob an armored truck,
this being just 8 days until Murtaugh is scheduled to retire. In the
interrogation room, Billy is murdered by Lieutenant Jack Edward Travis,
a vicious former cop who now sells guns that are stolen from evidence
storage facilities. The investigation of Travis teams Riggs and
Murtaugh up with Sergeant Lorna Cole of the Internal Affairs Division.
Martin Riggs has finally meets his match with Lorna Cole, a beautiful
but tough policewoman. Later, in a shootout against a street gang,
Murtaugh kills a gangster who turns out to be Darrell Smithers, the
best friend of Murtaugh's son Nick. A guilt ridden Murtaugh later tries
to drink himself to death, but Riggs helps him realize that they must
go after Travis, the man that Darrell's gun came from. They are also
joined by the hectic Leo Getz whom is now a legitimate real estate
agent.

Mel Gibson, Danny Glover, and Joe Pesci are back with director Richard
Donner for the third installment of the Lethal Weapon Saga, this time
joined by Rene Russo. Just like the first 2, this film has plenty of
comedy and allot of amazing action. This is a very enjoyable adventure.