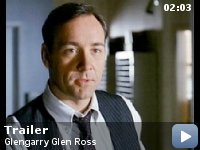 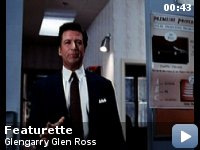 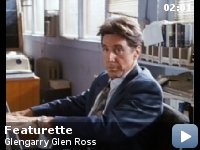 An examination of the machinations behind the scenes at a real estate office.

Storyline
Times are tough in a Chicago real-estate office; the salesmen (Shelley Levene, Ricky Roma, Dave Moss, and George Aaronow) are given a strong incentive by Blake to succeed in a sales contest. The prizes? First prize is a Cadillac El Dorado, second prize is a set of steak knives, third prize is the sack! There is no room for losers in this dramatically masculine world; only "closers" will get the good sales leads. There is a lot of pressure to succeed, so a robbery is committed which has unforeseen consequences for all the characters.

Taglines:
A Story For Everyone Who Works For A Living.

Ever since its release, the film has been used to train real life salesmen how to sell and how not to sell.

Continuity:
After the police interview Alan Arkin puts on his coat and leaves the office. In subsequent scenes his coat can be seen draped over the back of the chair at his desk. The coat appears and disappears in Jack Lemmon and Kevin Spacey's confrontation over the office burglary.

Williamson:
Just go to lunch, George!
[slams the door on his face]

One of top 100 greatest films of all time! and it's based on a play!


I cannot believe this film is rated below an 8

What else can be written about James Foley's adaptation of David
Mamet's Pulitzer prize winning play other than devastatingly scorching.

Jack Lemmon, Al Pacino, Ed Harris, Alec Baldwin, Kevin Spacey, Alan
Arkin, and Jonathan Pryce: perhaps the greatest acting ensemble ever
put before a camera, collectively portray employees of a real estate
agency- the sales department. Some of the greatest characters written
in the 20th century cinema. Lemmon, 'the machine' Levene, is the old
hero, now on a steady and sharp decline. Revered by others.
Pacino,Ricky Roma the hot shot. He keeps an arm's length from everyone.
Alan Arkin, George, is simply the loser. Never was hot, never will be –
totally hopeless. Ed Harris is Dave Moss, a fighter, kinda like DeNiro
in Raging Bull. Not hot, willing to do anything to reach the top. Like
a rabid pitbull. Frustrated and at the boiling point. Kevin Spacey,
Williamson, is the manager. A puppet of the owners, a real pencil
pusher. But at least he doesn't live off of door-to-door sales. Alec
Baldwin, in his greatest performance of his career, only taking up a
mere 10 mins of screen time, tears the screen to shreds and burns the
film up with one of the most incendiary, provocative, foul-mouthed,
scene-chomping speeches ever. I was 17 when I saw this in the theatre
and Alec Baldwin blew my mind with that scene. In college we used to
watch this film over and over and rewind the speech 10 times over. We
knew every line, every gesture. Jack Lemmon's face when Baldwin yells
"Put that coffee down! Coffee's for closers". Or "You see this watch?
this watch costs more than your car".We would kill ourselves laughing,
that's how much we loved it.

Mamet's character driven screenplay delves into the place in our souls
and in our psyches, where desperation exits. The men live off of
selling near useless Florida real estate, and their tool is the cold
call – the hard sell. Lemmon, Pacino,and Bladwin are true masters. Gold
belt senseis of the cold call. The bullcrap that they can unload is
remarkable. Stream of consciousness. Lie upon lie. Smug and greasy.
Pacino's monologue to the hapless gimmel Pryce, leads to tangents about
pedophilia, and the stench of urine in subways. He wields a cheezy
brochure of the properties like it's Shakespeare, with a picture of a
fabergé egg on it. Lemmon meanwhile desperately stands in rain drenched
phone booths, creating illusions to the listener like a verbal ballet.
When he worms his way into one of the lead's house, he plants himself
on the couch and grabs a stuffed animal he sees there. That little
thing he does there, that gesture; in those 3 seconds, his character's
conflict is symbolized. Though the guru to all younger than him, his
decline is turning into an avalanche, ready to bury him. He is so
desperate he resorts to the cheesiest, phoniest, approaches. It is
heartbreaking to watch. Drama not unlike that of the great Greek
tragedies of Aeschylus and Euripides. Classic human fare. Alan Arkin is
slightly type-cast as the bumbling, mumbling, passive, loser. He has
done it so many times. But this has to be the apex of that
characterization for him. Ed Harris is so full rage, spitting venom
(and literally spitting on Al Pacino during his farewell speech, his
"farewell to the troops"). It is literally one of the most expletive
laden tirades ever projected in mainstream cinemas. You are just
waiting for his ears to smoke and his head to explode. Gut wrenching.
Williamson, is subject to, by Roma and Levene, the harshest tongue
whippings ever. Ferocious, nasty, derogatory. Spacey is literally
humiliated by these masters of bulls**t. He most certainly gets his
comeuppance; and later, a pretty nasty little service return of his
own. Much is written in these reviews about the swearing in the film.
Swearing, in Mamet's works, is part of the syntax of those worlds. It
is almost like the curse words become subtext. It is like the plié in
his abusive ballet of words. But nonetheless, umbrage can be made about
this matter. It is after all, foul swearing, carpet-bombed from a
writer who uses it as his key verbal motif. You simply have to accept
as Mamet's artistic license and move on. It is one of those things that
you simply cannot let ruin the experience for you. Mamet is widely
considered one of the greatest living playwright and screenwriter in
the English language. Just consider the swearing as part of the
stylization of the cold-caller salesman language.

The narrative of Glengarry Glen Ross takes place in one evening and the
next morning, and is mostly in a dingy office and a Chinese restaurant.
Superbly light, and with an awesome jazz score, it has great camera
moves that highlight, accent, punctuate, and round out the actors'
performances. My favourite motif is the subway that rattles by – at
crucial moments of crucial dialogues. It is interesting to note, that
the director, James Foley, who superbly crafted this ensemble piece,
never really became an A-list director. All the elements are there,
perfectly and purposely assembled – the sound, the image, the
performances. Perhaps, Mamet did more directing than the writer
normally would? Or did the real cinema pros – the cast – just take the
ball and run, literally directing the film themselves, so used to
playing those roles on stage, with the exception of Pacino and Baldwin.
Another note of interest, is that I have seen this film numerous times,
with a variety of people, and have yet to meet a female who liked it.
This seems to categorize Glengarry Glen Ross as perhaps one the more
masculine, testosterone soaked, man-only films ever. Like wild male
animals fighting it out in the jungles. Despite that, I say this is
definitely a must see for guy and gal cinema lovers all over.