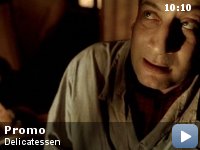 Post-apocalyptic surrealist black comedy about the landlord of an apartment building who occasional prepares a delicacy for his odd tenants.

Storyline
The story is centered on a microcosm of a post-apocalyptic society where food is so rare it's invaluable and is used as currency. The story centers on an apartment building with a delicatessen on the ground floor. The owner of the eatery also owns the apartment building and he is in need of a new maintenance man since the original "mysteriously" disappeared. A former clown applies for the job and the butcher's intent is to have him work for a little while and then serve him to quirky tenants who pay the butcher in, of course, grain. The clown and butcher's daughter fall in love and she tries to foil her father's plans by contacting the "troglodytes", a grain eating sub-group of society who live entirely underground. The "trogs" are possibly the most sensible of the lot, as they see food as food and not money.

Jean-Pierre Jeunet got the idea for a cannibal butcher when living in an apartment above a butcher's shop. Each morning at 7am he would hear the metallic clash of knives and a voice shout, "Chop chop!" His girlfriend said he was carving up the neighbors, and it would be their turn next week.

Audio/visual unsynchronized:
When Julie first invites Louison to her house, she accidentally throws a vase to the floor. There is no "crash" sound when the vase is destroyed.

Louison:
This is a job for the Australian!

One most inventive and original films to grace the silver screen

Delicatessen is hard to pin down under a specific genre label; it's a
surreal black comedy, a human drama, a post-apocalyptic horror movie, a
twisted thriller, a futuristic fantasy; and all in all; one of the
strangest and most original films I've ever seen.

In this fantasy world, the world has been ravaged and food is now in
short supply. This has therefore made food invaluable and it is being
used as currency. Things are traded for with grain, corn and lentils,
but not everyone can afford the luxury of food, and some have had to
resort to cannibalism to continue to enjoy eating. Our scene opens at a
delicatessen in an unspecified location in France, and we are treated
to an absolutely delicious sequence (no pun intended) in which a man is
desperately trying to hide himself in the trash can. We later find that
the reason for this is that this particular delicatessen hires handymen
and keeps them long enough to fatten them up, and then they are eaten
by the delicatessen's butcher and the inhabitants of the apartment
building in which they live. The story really gets going when an
ex-clown turns up at the shop, wanting the handyman's job, which
has…become available. The plot thickens when the new handyman meets,
and later falls in love with, the butcher's daughter; Julie. Julie
knows what goes on at the delicatessen and can't allow her new found
love to meet the same fate as the others, and therefore does the only
thing she can do; hire a band of vegetarian freedom fighters to save
her love from becoming dinner for the butcher and his customers.


Delicatessen is directed by the team of Marc Caro (whom, I'm afraid, I
am unfamiliar with) and the more well known Jean-Pierre Jeunet,
director of a few lesser known modern classics, but best known for the
enthusiastic 'Amelie'. The film is brought to life by a brilliant
ensemble cast. Dominique Pinon (who also featured in Jeunet's Amelie,
Alien 4 and City of Lost Children) takes the lead role of the clown
turned handyman. His performance is both understated and magical; as he
simultaneously manages to entice the viewer into his performance, and
yet keeps his character in the realms of reality (a place in which this
film doesn't take place). Jean-Claude Dreyfus is the real star of the
show, however, as the extroverted and over the top butcher. His
performance certainly isn't subdued, to say the least; and every moment
that he is on screen is a delight. In a stark contrast to Dreyfus,
Marie-Laure Dougnac; the young lady that plays his daughter and love
interest for Pinon is very down to earth, and is the most 'normal'
character in the film…although there's still room for her to be a
nearly blind klutz. The rest of the ensemble comes together
excellently, and not a single actor in the film performs below par or
looks out of place; and there's not many films that you can say that
for.

This film isn't quite like anything else I've ever seen. In fact, the
only film I can think of that is similar to this is Terry Gilliam's
futuristic fantasy; Brazil. The film draws it's originality from it's
plot mainly, which is extremely surreal and inventive in itself, but
it's not just that which makes Delicatessen one of a kind; it's all the
smaller plot points. How many films do you know that feature a bullshit
detector? (that is set off when the butcher tells it that "life is
wonderful", no less). The way that the film looks is also wonderfully
different; Delicatessen has a yellow hue, which lends it a style that
is very dull and dreary; and that does the film no end of favours when
you consider it's core subject material. The yellow hue also makes the
film almost feel like a moving comic book, which is one of the things
that gives the film it's surreal and absurd edge. I'm a big fan of
atmospheric films, which is one of the main reasons why I like horror
so much; and this film also has an atmosphere like no other. It's the
way that the yellow-ish buildings look next to the dark skyline, and
the way that the film uses darkness and smoke to make it more
horrifying (see roof sequence towards the end) that gives this film the
finishing touch to it's already distinct style.

The love story in the film is sweet and tender, and this very much
offsets the dark overtones of the rest of the film. This is nice, as
during the scenes between the clown (Pinon) and Julie (Dougnac), the
film allows itself to indulge in humour that isn't dark like the rest
of the film, and you get the impression that it's enjoying itself a
little more. This is just another thing in a long line of great things
that make Delicatessen a great movie. Another of these things is the
more minor characters. I have never seen a more motley crew than the
one in this film. As previously mentioned, Julie, although not entirely
'normal', is the most normal character in the film; the rest of it is
populated by lunatics. There's a man with a house full of frogs, a
woman that continually tries to commit suicide, a man that puts cans on
his deaf mother in law so they know where she is etc. The support
cast's wackiness don't add anything much to the story itself (which
only really requires them to be there), but the fact that they are
different and imaginative is another of the film's absurd edges, and
another thing that makes this film different from everything else.

Delicatessen concentrates more on being absurd and surreal than it does
in posing deep and philosophical questions. Personally, I have no
problem with that, but those who do want a movie to be deep and
meaningful might find the film disappointing because of that. That is
not to say that the film completely lacks depth or meaning; although a
moral to the story doesn't seem to present itself, the film takes it's
depth from the 'what if' scenario that it presents; "if the world's
food supply became too short to feed the population, would you resort
to cannibalism or join the vegetarian freedom fighters?". It's a very
general message; but it's definitely there.

Overall, Delicatessen is a sublime piece of cinema. You wont find
imagination and inventiveness to the extent that it is shown here in
most films, and that alone is reason enough to warrant this classic
status. Delicatessen is everything I say it is and more; and overall
the film is one of the true highlights of the 1990's. A gem.