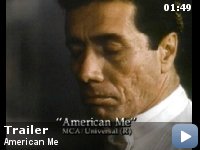 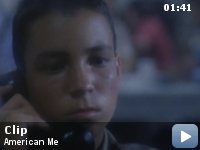 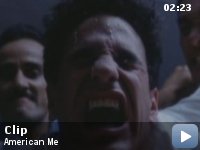 A Mexican-American Mafia kingpin is released from prison, falls in love for the first time, and grows introspective about his gangster lifestyle.

Storyline
This epic depiction of thirty years of Chicano gang life in Los Angeles focuses on a teen named Santana who, with his friends Mundo and the Caucasian-but-acting-Hispanic J.D., form their own gang and are soon arrested for a break-in. Santana gets into trouble again and goes straight from reform school to prison, spending eighteen year there, and becoming leader of a powerful gang, both inside and outside the prison, while there. When he is finally released, he tries to make sense of the violence in his life, in a world much changed from when last he was in it.

Rudy "Cheyenne" Cadena was not killed by his own gang as shown in the movie. In reality, he was killed by the Nuestra Familia, the rivals of the Mexican Mafia. As a result of this murder, the Mexican Mafia formed an alliance with the Aryan Brotherhood in 1972, and the Nuestra Familia formed an alliance with the Black Guerilla Family.

Puppet:
Can I talk to you a minute?

Puppet:
I heard about what happened. I'm sorry, Santana. Mi carnalito, he messed up.

Montoya Santana:
It wasn't his fault, ese. It was all American beef. When they wanna pop you they're gonna pop you. Want some grill cheese, ese?

Montoya Santana:
You sure, ese? It's good.

Puppet:
You know me, carnal, I'll do anything for La Eme. Anything. But I'm asking you, please, take my brother's name off.

Montoya Santana:
Your brother's name is on a piece of paper, ese?
[…]


American Me (1992) was the directing debut of long time character actor
Edward James Olmos. This film is a historical fiction depiction of the
rise of La Emme, The Mexican Mafia. The movie follows the lives of
three street gang members who by a sad twist of fate end up in
Juvenille Hall. From there they graduate to the big time. Folsom
Prison. Inside the walls of Folsom, the three form the most powerful
gang inside the California Penal System.

Olmos turns the story into a Shakespherian tragedy. A story about a
dangerous cycle that repeats over and over within certain communities
and how the lack of education can be dangerous. Like they say, an idle
mind is the devil's playground. Many of these characters had too much
"idle time" before they hit rock bottom. Olmos' direction, editing and
use of lighting is that of a long time film-maker. The cinematography
complements his directorial style. He makes these figures into noble
persons who live and die by a code forged from blood, shanks and sweat.
Great stuff from Mr. Olmos, a true masterpiece from a first time
director.

Sadly, Mr. Olmos has took a lot of flack for this film and has made
some powerful people very angry. If I were him I would have taken a
safer route and gave the prison gangs some fake names and cut all ties
to any "Technical Support" but that's not his style. He should be
commended for his efforts because others wouldn't have the courage or
conviction to do this. Mr. Olmos doesn't glamorize the lifestyle
either. Although they're men of honor amongst themselves I wouldn't
want to be in their shoes. But what people have to do to stay alive in
prison should not be looked down upon and on the other hand, when one's
on the outside they should leave what they learned within the prison
walls. Because it's a whole different ball game out here.