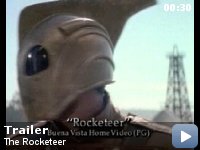 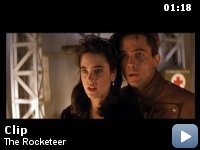 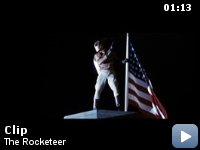 A young pilot stumbles onto a prototype jetpack that allows him to become a high flying masked hero.

Storyline
Straight from the pages of a pulp comic from a past era, the Rocketeer recreates 1930's Hollywood, complete with gangsters, Nazi spies, and the growth of the Age of Aviation. Young pilot Cliff Secord stumbles on a top secret rocket-pack and with the help of his mechanic/mentor, Peevee, he attempts to save his girl and stop the Nazis as The Rocketeer.

The plane flown by Cliff in the opening is the Gee Bee racer, specifically Model "Z" from 1931. It was built by the Granville Brothers Aircraft Company (brothers Zantford, Thomas, Robert, Mark, and Edward), hence the plane's initials "G.B." The R-1 was for a time the fastest land-plane in the world, essentially a cockpit, wings, and tail built around an 800 hp Pratt & Whitney Wasp engine. James Doolittle (who would lead the bombing raid over Tokyo in 1942) won the 1932 Thompson Trophy race flying a Gee Bee R-1 at a speed of 252.686 miles per hour.

Errors made by characters (possibly deliberate errors by the filmmakers):
When the Nazi agent is talking to the dirigible captain, he says, "Sie haben Ihre Bestellungen!" ("You have your orders!") The German word for a military order is "Befehl". "Bestellungen" are the orders you give a waiter.

Neville:
I shall miss Hollywood.
[Neville straps the rocket on and leaves, unaware of the gas leak]

Cliff Secord:
I don't think so.
[the rocket explodes, killing Sinclair and crashing into the Hollywoodland sign, destroying the last four letters]

I love this film. Absolutely love it. Can't help it. I'm a child of the
40s and this movie is about when I was a kid. The sets are great, the story
is 40s, the cars, the cafe with the bizarre little gingerbread giving an
impression of a gnome's hangout, the costumes, the hero with his wiffle hair
style, the airplanes and even Howard Hughes. What more could you want? No,
this isn't The Matrix with a lot of slick computer effects with mind
twisting is it or isn't it real. It's clear who the bad guys are– and
they're bad, except when, of course, the mob types are swept away by
patriotic feelings and fight the Nazis. It's got it all. A wonderful trip
back into the 40s with near superhuman villans, beyond the pale heros and
lovable sidekicks.