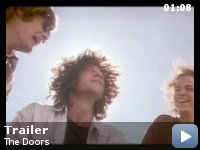 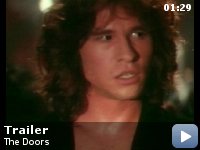 The story of the famous and influential 1960's rock band and its lead singer and composer, Jim Morrison.

Storyline
Oliver Stone's homage to 1960s rock group The Doors also doubles as a biography of the group's late singer, the "Electric Poet" Jim Morrison. The movie follows Morrison from his days as a film student in Los Angeles to his death in Paris in 1971, at the age of 27. The movie features a tour-de-force performance by Val Kilmer, who not only looks like Jim Morrison's long-lost twin brother, but also sounds so much like him that he did much of his own singing. It has been written that even the surviving Doors had trouble distinguishing Kilmer's vocals from Morrison's originals.

Taglines:
"There are things known and things unknown and in between are The Doors." — Jim Morrison

Ian Astbury, (lead singer for the band The Cult), was considered for the role of Jim Morrison by Oliver Stone. They had lunch in Hollywood to discuss the role, but Astbury declined the role, stating he (and the surviving members of The Doors) did not like the screenplay. From 2002 until 2007, Ian went on tour with The Doors as lead singer.

Anachronisms:
The Doors manager tells Jim that he is not going to go through this again with him and lose him at the bottom of a bottle of Southern Comfort like Janis. This is referring to Janis Joplin. The scene takes place in the studio right before a 1969 concert. The next scene after that takes place in spring of 1970. The thing is Janis Joplin did not die until October 4th, 1970.

Ray Manzarek:
[Imitating Bob Dylan's singing voice]
Johnny's in the basement mixing up the medicine, I'm on the pavement thinking about the government.

We all know how legendary The Doors were and still are, and sooner or later
someone was going to make a film about them. Might as well be Oliver Stone.
Given the subject matter, Stone was able to go off the deep end with his
imagery here to the point of making one have an epileptic seizure OR think
they just dropped some acid. Either way, it's great to watch in my
book.

The film is flawed in that it's not titled correctly. It's not about The
Doors, it's about Jim Morrison and basically just the wild and crazy side of
him. That's ok I guess, Morrison was The Doors. Many have criticized Stone
for not depicting Jim in the proper light, but given how many people knew
him it had to be an almost impossible task to please everyone as everyone
knew him differently. I think we all can attest to this through the
friendships we have with our friends. Some know us as one way, and some know
us as another. I respect Stone for trying and feel sorry for him about the
flak people have given him as I know he is a very talented director. I think
his intentions were spawned out of true admiration and that he made this
film for himself and to pay tribute, and not to win any awards. More of this
can be found on the Special Edition DVD from Stone himself.

Even if one does not enjoy the trippy qualities of the film such as I do, or
any part for that matter, one could not avoid admitting how well Val Kilmer
portrays Morrison. It's simply amazing and is one of the best performances
that I can bring to mind, and is the best example of how to literally become
someone else, bar none. He doesn't act like he's Jim Morrison, he becomes
Jim Morrison. He is Jim Morrison. This is no doubt helped by the uncanny
facial similarities the two have. Not only that, most of the singing that's
in the film was done by Kilmer himself and even a few of the original band
members admitted that they honestly could not tell the difference between
their two voices. Even if you hate Val Kilmer, this performance jumps in
your face and screams for respect while trying to strangle
you.

As mentioned earlier, some do not like the film for several reasons. One is
that it makes Jim look like a monster and that it only glorifies his wild
and uninhibited behavior. Two is that it's basically just one big acid trip
into bits of history about the band. For one, Oliver Stone said it
best….when you have to condense a person's life, a legend at that, into
two measly hours you must take the highlights. Everyone lives longer than
two hours, even Jim. We all know Jim was crazy, and with so many of the
insane stories Stone heard while trying to piece together the script for
this, a lot of what he heard was simply what you see. The wild and crazy
side. As a result, what we're left with is not an accurate depiction of The
Doors or of Jim Morrison. It is entertaining, yes, but it is not accurate. I
think it could have been done perfectly, but it would have been
excruciatingly difficult…and still not everyone would like it. And as far
as the trippiness of the film, well that's Oliver Stone for you. We saw the
same thing in Natural Born Killers a few years later. I personally like the
style of it and felt that it was in place here but that's just my opinion.
The '60's, drugs, and rock and roll equals trippy.

Overall a decent attempt at one of the most difficult subjects to cover,
legends. And even though it's not entirely accurate and even though Morrison
is one of my idols and he deserved a little better, I do enjoy the film
greatly. The film should have been named Pandora's Box.