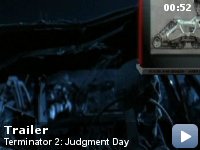 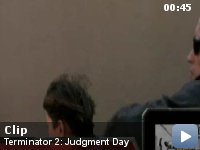 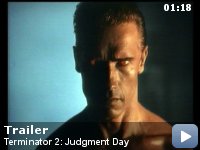 The cyborg who once tried to kill Sarah Connor must now protect her teenage son, John Connor, from an even more powerful and advanced Terminator.

Storyline
Nearly 10 years have passed since Sarah Connor was targeted for termination by a cyborg from the future. Now her son, John, the future leader of the resistance, is the target for a newer, more deadly terminator. Once again, the resistance has managed to send a protector back to attempt to save John and his mother Sarah.

Taglines:
It's nothing personal

This is the only 'Terminator' film to win (or be nominated for) an Oscar. It won 4 (and was nominated for 2 others).

Continuity:
When the Terminator crashes through the Cyberdyne front entrance in the police SWAT van to rescue Sarah and John, the Cyberdyne reception desk/security station is no longer there.

Sarah Connor:
[narrating]
3 billion human lives ended on August 29th, 1997. The survivors of the nuclear fire called the war Judgment Day. They lived only to face a new nightmare: the war against the machines. The computer which controlled the machines, Skynet, sent two Terminators back through time…

the best action film of all time, and NOT due to the CGI

Disclaimer: If you are a viewer that mainly prefers arthouse-type movies,
then you might as well ignore this review. In addition, if you're not able
to take a few sci-fi leaps of faith, ignore this review, as well. We'll
both
be better off.


This is the finest action movie of all time. And, yet, believe it or not,
it's not the action in the film itself that makes this be the case. This
is
especially odd in a movie with a $100 million budget (in 1991!), with
multiple huge explosions, with thousands of bullets fired, and scores of
stuntmen used.

But, a little bit of background is due. This is the sequel to the
Terminator
(1984), whose premise was that a near-indestructible cyborg is sent by
evil
self-aware machines from the near future to destroy the mother-to-be of
the
military commander who would lead the humans to a victory over the
machines.
Oh, and this terminator machine would come from a time of war between men
and machines which followed a nuclear exchange that left billions of
people
dead, first. In Terminator 2, John Connor (the commander-to-be) is about
12
years old, and his mother (Sarah) is feverishly trying to prepare him for
his fate, even as she tries to stop the factors that will lead to the
nuclear war and the entire terrible future that made all this necessary.
The
machines now send a superior, more intelligent, shape-shifting cyborg
(T1000) into the past, to kill John himself. Meanwhile, future-John
reprograms the ex-evil Terminator (T101) from the original film, and sends
him into the past to PROTECT John against the T1000.

That's your basic plot. It does involve travel into the past, so it
immediately presents a time-travel paradox which can't really be resolved.
In order to even try watching this movie, you MUST LOOK PAST THE PARADOX.
If
you don't, this movie has zero credibility, and is not worth your
time.

What happens after the two terminators appear in the past is a wild ride
rife with macho action, dark reflection on the nature of man, and a few
rays
of hope, here and there. Schwarzenegger (the good terminator) and Patrick
(the bad one) make for such effective foes that the times they meet
on-screen are completely breathtaking (and odd, given that you repeatedly
see the relatively slim T1000 through Arnie through a wall or two).
Hamilton, as Sarah Connor, is a wonderful character — tough beyond all
belief and completely focussed on preventing the nuclear war and ensuring
John's safety, yet clearly a little out of her mind with paranoia and
anger;
amazingly, you see actual character development (specifically, when John
and
T101 arrive at Dyson's house to prevent her from doing what she wants to)
in
her otherwise 2-dimensional character. And Furlong, as John, is not bad
himself as the extroverted kid who's confused by the fact that everyone
except his mom tell him his entire upbringing was based on a lie. The bit
players all do their jobs well, particularly Earl Boen who plays the
semi-sadistic mental hospital warden that stands between Sarah Connor and
her son (until the T1000 makes a chilling entrance).

With these players set in motion, it's up to the script to deliver the
real
substance of the movie. (One often sees great performances in mediocre
films… here the story transcends the performances — an impressive
feat.)
The script delivers. The film is absolutely filled with great, classic
moments (I counted TEN all-star ones during my last viewing), and they're
evenly spaced through the movie. I mean, who doesn't cheer (at least
inside)
when Arnold steps out of the biker bar, fully clad in leather when "Bad to
the Bone" music starts to blast? The guy absolutely bleeds coolness. And
the
T1000 absolutely bleeds evil. But, with so many great moments, you'd think
the pacing would be a little uneven… not really! The film shifts from
place to place with an ease that makes perfect sense, never giving you the
time to start being a little nitpicking jerk, always driving forward, but
always doing so thoughtfully and with attention to detail.

Of course, this wouldn't be an action movie without some action. There's
plenty of it, and it's perfectly done. The CG effects for the
shape-shifting
T1000 were cutting-edge for the time, and still look great (whoever said
differently below is simply incorrect) — even if they're completely
commonplace today. The stunts are completely insane in scale (at one
point,
a helicopter flies under a highway overpass; at another, a motorcycle
jumps
from the 2nd floor of a building into a flying chopper). (Probably, only
the
Matrix and the Lord of the Rings movies compare in terms of the level of
stunt insanity.) And the gunplay is delivered in perfect
Cameron-Schwarzenegger style (as opposed to the slo-mo John Woo-style) —
you'll see lots of heavy automatic and explosive weapons, and you'll see
them used well. The film is violent, and somewhat bloody, but ALL of the
mean-spirited violence is dealt by the evil characters, not the ones you
root for (Quentin Tarantino fans: sorry). And then the truly amazing
scenes
that bypass acting are shocking and memorable — just wait until the
nuclear
detonation sequence.

I'm not sure what else you would want in a movie. Probably moral content,
and the movie has a very clear pro-human, anti-war message. The message is
a
bit stale, and the delivery IS, at times, a little heavy-handed (and some
moments with the T101 seem just a bit unrealistic, towards the end), but
the
movie has heart, and that you cannot deny. Plus, it simply rocks.
10/10