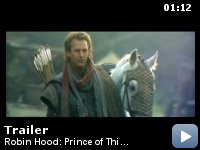 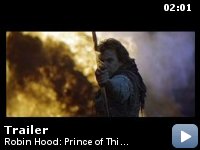 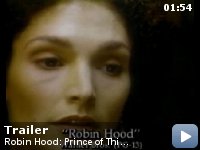 When Robin and his Moorish companion come to England and the tyranny of the Sheriff of Nottingham, he decides to fight back as an outlaw.

Storyline
After being captured by Turks during the Crusades, Robin of Locksley and a Moor, Azeem, escape back to England where Azeem vows to remain until he repays Robin for saving his life. Meanwhile, Robin's father has been murdered by the Sheriff of Nottingham and when Robin returns home he vows to avenge his father's death. Even though Marian, his childhood friend, cannot help him, he escapes to the Forest of Sherwood where he joins a band of exiled villagers and becomes their leader. With their help he attempts to cleanse the land of the evil that the Sheriff has spread.

Taglines:
For the good of all men, and the love of one woman, he fought to uphold justice by breaking the law

Richard Griffiths passed on the opportunity to play Friar Tuck.

Errors made by characters (possibly deliberate errors by the filmmakers):
After Azeem is attacked by one of the boat men on arrival on English shore, he states to Robin that he can't be taken by anyone especially if he attacks from down wind with garlic on his breath. Actually, if the attacker were down wind, the odor would be traveling away from Azeem. The attacker would have to be up wind for the odor to be detected.

Prisoner:
Show them the courage of Allah!

Possibly the best Robin Hood movie ever made

Robin Hood: Prince of Thieves is a movie that I've watched since I was
a little girl and I still to this day absolutely adore it. Now granted
I know that there was a few flaws with this film as I grew up and
noticed that maybe Kevin Costner's accent wasn't so British or
Christian Slater's. But if we all always complained about accents, I
think we wouldn't enjoy movies as much. I love Robin Hood because it
has action, adventure, romance, horror, magic, everything you can
imagine is in this film. Not to mention that I think we got pretty darn
good performances. My personal favorite is out of Alan Rickman as the
Sheriff of Nottingham, he is absolutely hilarious and a terrific
villain. This is my favorite Robin Hood story of all time.

Robin of Locksley, an English nobleman, is captured and jailed in a
dungeon in Jerusalem along with his comrade, Peter. With their
execution inevitable, Robin engineers an escape, saving the life of a
Moor, Azeem in the process; Peter dies in the attempt and has Robin
swear to protect his sister Marian. Robin makes the long journey back
to England with Azeem, who claims he must accompany Robin until the
debt of saving his life is repaid. In England, with King Richard I
gone, the cruel Sheriff of Nottingham rules over the land with fear,
aided by his brute cousin, Guy of Gisbourne along with the precognitive
evil witch, Mortianna , and the corrupt Bishop of Hereford. At Locksley
castle, Robin's kind father Lord Locksley has been killed by the
Sheriff's men, after refusing to join them for the Sheriff's unknown
but treacherous scheme. Robin and Azeem arrive to find Robin's formerly
luxurious abode of Locksley Castle destroyed and his father, murdered.
Lord Locksley's loyal servant, Duncan, has survived, though his eyes
were removed. With his lands and reputation gone Robin swears to avenge
his father's murder. Robin then begins by seeking out, Maid Marian, the
cousin of the king and his childhood friend. He is immediately
attracted to Marian, although she does not return the feelings, which
poses a problem because Nottingham also has his sights set on her.
While Robin, Azeem and Duncan escape the revenge seeking Gisboune and
his soldiers, they seek shelter in the Forest of Sherwood, where they
come across Little John, and a large group of woodsmen, all of whom
were outlawed through the tyranny of the Sheriff. After proving his
skill in single combat, Robin is accepted into their group and
eventually becomes their leader, though Will Scarlet, one of Robin's
men, is constantly undermining his leadership. Robin encourages his men
to fight back against Nottingham and begins to train them to defend
themselves while they build weapons and homes in the forest, it's their
time "to take it back".

If you haven't seen Robin Hood: Prince of Thieves I highly recommend
that you do, honestly I don't know why anyone would not enjoy this film
just a little bit. Like I said, it has everything to make a film great.
My favorite scene, hard to choose from so many, is the ending battle
scene where they discover that Robin Hood is alive and he is there at
the castle to save his beloved Marian, it's a great scene that keeps
you on the edge of your seat. So please just get past the accents, give
this movie a chance, it's a terrific story and a wonderful movie that I
will still watch and probably will even more so as I grow older.
Besides I have to just to see Alan Rickman threaten Robin Hood with a
spoon, lol, greatest threat ever.