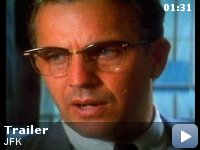 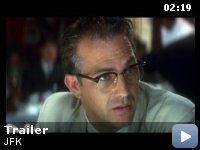 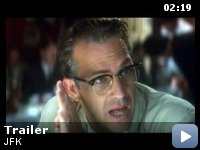 A New Orleans DA discovers there's more to the Kennedy assassination than the official story.

Storyline
Details the actions of New Orleans District Attorney Jim Garrison, who takes it upon himself to investigate the assassination of President John F. Kennedy in Dallas, Texas, in 1963. Garrison is extremely suspicious of the official story presented by the FBI, and what he already knows and what he subsequently learns lead him to suspect that there is more to the story than the public is being told.

Taglines:
He's a District Attorney. He will risk his life, the lives of his family, everything he holds dear for the one thing he holds sacred… the truth.

Garrison's final lines in the film – "If it takes me 30 years to nail every one of the assassins, then I will continue this investigation for 30 years. I owe that not only to Jack Kennedy but to my country" – are lifted directly from the last word of his 1967 'Playboy' magazine interview.

Anachronisms:
When Garrison is in the airplane with Senator Long we see upper hand luggage shelves already fitted with doors. At the time they were plain open.

title card:
"To sin by silence when we should protest makes cowards of men." – Ella Wheeler Wilcox

President Eisenhower:
…We have been compelled to create a permanent armaments industry of vast proportions. And to do this three and a half million men and women are directly engaged in the defense establishement. We annually spend on military security alone…

President Eisenhower:
…This conjunction of an immense military establishment and arms industry is new in the American experience. The total influence – economic, political, even spiritual – is felt in every city, every Statehouse, every office in the federal government. We must guard against the aquisition of unwarranted influence – whether sought or unsought – by the military-industrial complex. We must never let the weight of this combination endanger our liberties or democratic processes.
[…]

One of the best and most important films ever made!

Oliver Stone's epic film which follows the real-life events of New Orleans
District Attorney Jim Garrison is a monumental movie event. It should have
been named the Best Picture of 1991 instead of The Silence of the Lambs.

Everything about this film is perfect and it shows that when an intriguing
story comes together with all other elements of filmmaking that are executed
brilliantly, the film works on so many levels.

First off, Stone's direction is as good as it gets. He has an incredible
passion for the subject, knowledge of the art and relationship with the
camera. All of his footage goes together seamlessly and makes the 3 h 08
min running time blow by. He gets a strong performance out of the entire
ensemble cast especially Costner, Jones, Oldman, and Pesci.

Scalia and Hutsching's editing is a work of art and tells the complicated
story with incredible precision. Richardson's cinematography lights up the
screen in both colour and black and white. Both of these technical aspects
of filmmaking are molded into sheer artistry by these three men who have all
deserved their Oscars for this film.

John Williams' score is one of his best (right up there with his Indiana
Jones and Star Wars). The script is intelligent, thought-provoking,
mesmorizing and heart-wrenching. Costner's closing speech to the Jury is
finer that Nicholson's in A Few Good Men, McConaughey's in A Time to Kill
and Jackson's in Pulp Fiction. It is Stone and Sklar's best
work.

The subject matter is incredibly controverial and subjective but Stone's
delivers it with such emotion and raw power that his alternate myth to the
Warren Report seems factual. The film is an investigation into the human
spirit and how the vigour and dedication of one man and his team of
associates can rise above the highest powers of the world and encode a
message into the minds and hearts of millions. John F. Kennedy has
countless achievements and qualities as a president which makes his life and
term one of the most incredible and worthy of deep study.

Oliver Stone's JFK should go down in film history as one of the most
important American films ever produced. Watch it with an open mind free of
prejudice and predisposition and you will find yourself wanting to go to the
library and learn more about this global tragedy.