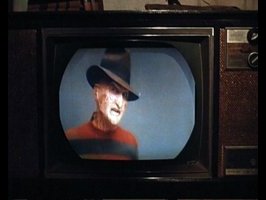 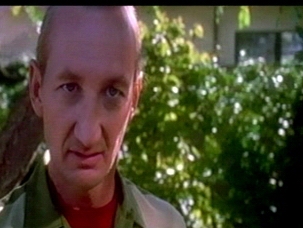 Freddy Krueger returns once again to haunt both the dreams of his daughter and Springwood's last surviving teenager.

Storyline
In part six of the Nightmare on Elm Street series, dream monster Freddy Krueger has finally killed all the children of his hometown, and seeks to escape its confines to hunt fresh prey. To this end, he recruits the aid of his (previously unmentioned) daughter. However, she discovers the demonic origin of her father's powers and meets Dad head-on in a final showdown (originally presented in 3-D).

Taglines:
Take Him Home in a Box!

Peter Jackson's original screenplay for Freddy's Dead saw Freddy aging and growing weak within the dream world. The teens of Springwood would have drug-fuelled slumber parties for kicks, and enter the dream world to beat him up.

Continuity:
When Maggie grabs Freddy in the dream, she wraps her arms around his chest over both of Freddy's arms. In the next shot, Maggie's left arm is under Freddy's left arm.

Freddy Krueger:
I didn't need a glove to kill your bitch of a mother, and I don't need one now!

OK, I think this is Freddy's 6th death already


Freddy's Dead: The Final Nightmare, the sixth installment of the
Nightmare on Elm Street series and once again another bad sequel. I
think this is tied up with the last sequel of the Dream Child. I was
lucky enough to get the Nightmare on Elm Street series box DVD set for
my birthday, so I got to see all the sequels. May I say that I'm just
getting more and more disappointed though with these sequels, at least
the past two, it just seems like Freddy lost his edge. It's almost like
the writers were trying to give Freddy a soul and they're just
destroying it instead of reinventing the story. This was a sequel that
wasn't needed, sorry to Robert Englund, but this was very much below
what Freddy Krueger represents.

Freddy is back, but he's got something we don't know about, a daughter.
Maggie, she's not aware that he is her father, but soon she finds out
what his dark secrets are and he wants her help. She has to do her best
to resist his powers, but it's hard with all the good memories she has
of her loving father. Ironic, isn't it? But Freddy isn't giving up
without manipulating her into his ways.

Freddy's Dead: The Final Nightmare is also presented in 3-D, radical,
huh? Note the sarcasm. This is one of the worst sequels, it's tied up
with the fifth sequel of the Nightmare on Elm Street series, I'd rather
watch the second Nightmare on Elm Street to be honest. This just had
bad acting, stupid editing, and just over all a bad idea for a story. I
didn't like the concept of it and it just ruined the whole idea of who
Freddy Krueger really is, the death master of nightmares, not Father
Knows Best.