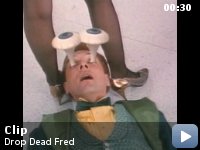 A young woman finds her already unstable life rocked by the presence of a rambunctious imaginary friend from childhood.

Storyline
A young woman who's attempting to find her place in the world battles with her controlling mother and a womanizing husband finds comfort and confusion with the appearance of her childhood friend. It is a zappy movie that emphasizes self-actualization.

Taglines:
Imagine having this guy for a friend

The steamboat that Janie lived on is an actual residence.

Miscellaneous:
When Fred is in the engine room of the houseboat, you can see the paddle wheel in the background moving back and forth while the boat is still moving forward

Polly:
And the prince took the beautiful young girl in his arms and said, will you marry me? Yes, she whispered, I will be your princess.

Young Elizabeth:
Did they live happily ever after?

Polly:
Of course, Elizabeth.
[tucking her in]

Young Elizabeth:
How do you know?

Polly:
Because she was a good little girl. If she had been naughty, the prince would have run away.

Young Elizabeth:
What a pile of shit!

Don't let her turn you into one of them!

Drop Dead Fred is a difficult film to review. I saw it for the first time
when I was 13 years old or something, and I absolutely loved it because I
was right in the middle of the age group at which the film is directed. I
watched it again recently, and while the film's slapstick comedy did not
hold quite the same massive appeal (although I was still hugely
entertained)
as it did when I was younger, I regretted to discover that I had grown out
of a lot of the goofy antics that went on in the movie.

However, I was reading through some of the reviews written on the IMDb by
other users, and was amazed at how offended a couple of people were by
this
film, revealing in their reviews a total detachment from their own inner
selves and a complete misunderstanding for the little people that we call
kids. No, for example, I would NOT recommend a seven year old girl to
psychiatric help for making a mess. This is arguably one of the most
ludicrous ideas that I have ever read on the Internet Movie Database in my
entire life, and believe me, I have read some jaw-droppingly moronic
comments on this beloved site.

If you read through the user comments for this movie, you can so clearly
see
the difference in the people who liked it and the ones who hate it that it
almost makes you laugh out loud that these people can't see that they are
exactly the kinds of people that the movie rebels against. Drop Dead Fred
begs Elizabeth not to let her mother turn her into one of them because he
doesn't want her to turn into the kind of person who is so uptight and
frigid and barren that she would be incapable of enjoying exactly the kind
of entertainment and fun that Drop Dead Fred is.

This is a movie that was made for people who are still in touch with their
inner child, people who realize that a little girl with a mother who has
absolutely no understanding of the mind of a child has every right to
escape
into the world of an imaginary friend if it will help her escape the
grayness and responsibility imposed on her by her mother, who demands
absolute perfection and hasn't the first clue about how to raise a child.
Very similar things can be said about various IMDb users, such as ones who
refer to Fred as a product of a deranged mind or say anything about
psychos
or brutality or insanity.

Drop Dead Fred is not a film about an insane little girl. Indeed, I like
to
think that the world is populated mostly with people who understand that
the
minds of young children operate slightly differently than their
parents'and
our own, and that they can be forgiven for getting into a little mischief.
I
am generally against grouping together people who did not like a certain
film, but in this case it seems overly obvious that the people who wrote
negative reviews of this fun comedy are simply the people who resent being
pointed out as the kinds of people that they are.

Drop Dead Fred is a movie that was made for fun, to be enjoyed, laughed
at,
and respected for reminding us that we need to lighten up occasionally
and,
while not necessarily flinging spaghetti in a nice restaurant, act like
children every once in a while to prevent ourselves from being driven
insane
by the fast-paced society that we live in. And if you can't do that, if
you
hated Drop Dead Fred because you simply can't understand that concept, if,
indeed, you think that Elizabeth is in dire need of psychiatric care, you
may want to step back and look closely at your life and your views.

YOU may be the one in need of therapy.