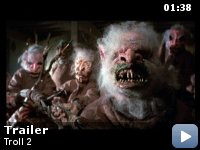 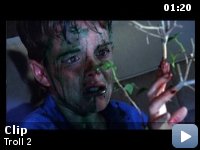 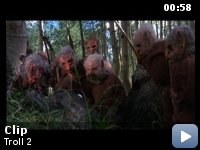 A family vacationing in a small town discovers the entire town is inhabited by goblins in disguise as humans, who plan to eat them.

Storyline
A young child is terrified to discover that a planned family trip is to be haunted by vile plant-eating monsters out of his worst nightmare. His attempt to save his beloved family is assisted by the spectre of his deceased grandfather. Also, there are NO trolls in this movie, only goblins.

Taglines:
The original boogeyman is back

Rossella Drudi, The Director's wife and co-writer of the film, got the idea to write the movie after several of her friends became vegetarians at the same time – this is why the Goblins in the film are vegetarians.

Crew or equipment visible:
When Drew is leaving the store after buying milk, there is a close-up shot of a man wearing sun glasses. If you look carefully you can see the reflection of the camera man standing on the street.

Diana:
Michael! Who are the goblins?

The Holy Grail of bad movies


This is it, folks — the worst movie ever made.

I know, I know, there are many who argue that "Plan 9 from Outer Space"
and "Manos: The Hands of Fate" are worse "films" than this one. Well,
I'd advise those people to give "Troll 2" another viewing, this time
with an open mind. As something of a self-made authority on the worst
of the worst in modern cinematic torture, I feel qualified to make the
bold assertion that "Troll 2" is the cream of that particular crop.

From its laugh-inducing "soundtrack" (apparently recorded using only a
vintage 1980s Casio keyboard) to its unilaterally awful acting, "Troll
2" is a life-changing experience, similar to the Middle Ages' trials by
fire. If you succeed at ingesting this festering piece of cinematic
detritus in one sitting, you will emerge a new person, like a phoenix
rising from its own ashes. The watching itself may be painful, but it
is ultimately worth the pain to be able to say, with conviction, "I
survived 'Troll 2,' and I'm still technically alive."

The acting — my God, where do I start? Suffice it to say that, if you
set any cast member on fire, I would lay down even money that he or she
would have a hard time convincing onlookers that it hurt. They're
really that bad. More trivia: One of Elliot's "boys" in this movie
would later go on to reprise his role (Disposable Character in Bad
Movie) in the Lou Diamond Phillips classic "Bats." Even more trivia:
The father in this movie was a local dentist, and most of the extras
were bona fide Utah residents, as well. Talk about low-budget.

Back to the soundtrack — There's not a single scene in the movie where
the music is appropriate to the on-screen action. I get the impression
that the "composer" employed for this stinker was, in fact, a failed
auditioner for Def Leppard's still-vacant keytarist position.
Seriously, it's rare, even in straight-to-video dogs like this one, to
hear music of this woeful caliber.

What more can I say that hasn't already been set forth in previous
reviews? This is the worst movie I have ever seen, and that's saying
something. It's physically, mentally, and emotionally exhausting to
watch this film — I recommend doing it alone, at least the first time
you see it…that way, you can concentrate on its truly majestic
badness — and on feeling your brain cells die off, one by one, until
you are no longer able to speak.

Good luck to you, if you decide to watch this one. It doesn't get any
worse than "Troll 2."

ADDENDUM (October 2007): This is still the worst movie of all time. Its
status as such will never change. "Troll 2" is simply the perfect storm
of bad writing, casting, direction, cinematography, costuming, score,
makeup, effects, acting, editing, and inspiration.

UPDATE (June 2010): I just watched it again. Alone. In one sitting. God
help me, some component of my brain must be fundamentally defective.

TagsUSA
Marked for Death
Night of the Living Dead