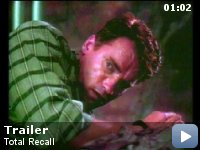 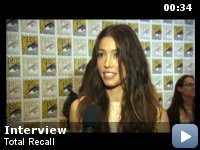 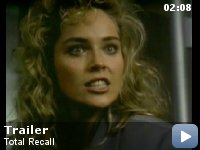 When a man goes for virtual vacation memories of the planet Mars, an unexpected and harrowing series of events forces him to go to the planet for real, or does he?

Storyline
Douglas Quaid is haunted by a recurring dream about a journey to Mars. He hopes to find out more about this dream and buys a holiday at Rekall Inc. where they sell implanted memories. But something goes wrong with the memory implantation and he remembers being a secret agent fighting against the evil Mars administrator Cohaagen. Now the story really begins and it's a rollercoaster ride until the massive end of the movie.

Taglines:
They stole his mind, now he wants it back.

Continuity:
When Douglas Quaid is attacked by his workmates in the subway one of them appears, in some shots, with his face stained with blood but no stains are visible in other shots.

[Doug awakens from a nightmare]

Lori:
Doug? Honey, are you all right?
[nods]

Lori:
You were dreaming. Doug? Was it about Mars?
[nods]

Lori:
[kisses him]
Is that better?

Lori:
My poor baby. This is getting to be an obsession.


Set during an unspecified future era, Douglas Quaid (Arnold
Schwarzenegger) is a construction worker who longs for a trip to Mars.
His wife, Lori (Sharon Stone) isn't so keen on it–she'd prefer a trip
to Saturn, or a space cruise. Riding on the subway one day, Quaid
notices a television advertisement for a company named Rekall, which
specializes in memory implants of vacations. Quaid checks into it as an
alternate means of having a "Mars vacation". While at Rekall, he
chooses an alternate personality upgrade of a secret agent. However,
while undergoing the procedure, something goes wrong. He learns that
his Quaid identity was a memory implant and he really _is_ a secret
agent. Now that he has his real memory back, he's on the run and he
escapes to Mars. But why is everyone after him?


Total Recall, based on "We Can Remember It for You Wholesale", a short
story from 1974 by Philip K. Dick (and novelized in conjunction with
the film production by Piers Anthony), had a laborious history getting
to the silver screen. Tens of drafts were written. Production companies
were attached then went out of business. Many directors and stars were
attached who either changed their minds or who were dropped. Luckily,
Arnold Schwarzenegger talked Carolco into picking up the project for
him, with Paul Verhoeven–who'd already proved his mettle on the
similarly toned RoboCop (1987)–on board as director, because this is
an excellent film.

While Total Recall certainly has influences, including "The Martian
Chronicles" (1980), Dune (1984) and the first major film based on a
Philip K. Dick work, Blade Runner (1982), it's more notable for the
films that it has influenced in subsequent years, including The Fifth
Element (1997) and many of the "rubber reality" films such as Abre los
ojos (1997)/Vanilla Sky (2001) and The Thirteenth Floor (1999). It's
also yet another film on the very long list that have had various
elements "adapted" into part of The Matrix (1999)–most explicitly
here, the "bug" that Quaid has to remove from his body with a high-tech
machine and the possibility of "waking up" from a particular reality by
taking "the red pill".

Although it's easy to interpret Total Recall in a very straightforward
manner, so that the bulk of what we're seeing at any particular moment
and the bulk of the dialogue are the literal reality, very convincing
arguments can be made that the majority of the film is a depiction of
Quaid's memory implant while in the "patient's chair" at Rekall. And
those certainly aren't the only two interpretations possible.

What matters more than thinking one has a "right answer", though, is
the deeply captivating story that provokes our interpretations and the
amount of fun we have getting there. Verhoeven and the scriptwriting
team, which included Dan O'Bannon and Ronald Shusett, the writing team
behind the Alien films (beginning with Alien, 1979), never let us go
very long without another plot twist, most of which force a
reinterpretation of the material that went before. The twists occur
about once per every ten minutes, if not more frequently.

The film is notable for its special effects by Rob Bottin, which were
far ahead of their time, and its fantastic production and art design,
which manage to make us feel both that we're experiencing a vicarious
trip to a "future grunge" Mars and an almost "Doctor Who" (1963)-ish
absurdly artificial reality, complete with supersaturated red skies,
ala Frank R. Paul's illustrated covers for the Amazing Stories fiction
magazine.

Some locations in Mexico were used for the film, including some subway
shots on Mars, and actual commercial sign age was incorporated into the
film. There's a lot of fun to be had noticing all of the cultural
differences and similarities that the future era of the film will
bring. Verhoeven delights in subtle glimpses of various symbols and
accoutrement's. His view of the future is one full of corruption,
commercialism and decadence. He doesn't have much confidence in a
"bright new world" as humans spread out to new territory.

Verhoeven is basically extending the way things are now to the future;
it's as if he sees our state as indicative of human nature, so that as
long as we're humans, people are going to be taking advantage of one
another, trying to control one another, engaging in behavior that's a
conflict between desires and societal mores, but also helping out each
other when the going gets tough. In these respects, Total Recall has
culture-satirical similarities to later films such as Starship Troopers
(1997), which isn't surprising given that Verhoeven directed both
films. It's notable that Total Recall's future is not quite as bleak as
Starship Trooper's.

But the film is hardly less violent. Verhoeven's initial cut was given
an X by the MPAA for violence. A number of scenes had to have small
edits, most of which have thankfully been restored on at least one
special edition DVD. The violence here is a lot more small scale and
personal than Starship Troopers. In terms of the visceral, Total Recall
often rides a gray area somewhere between action and horror. While the
action isn't as explosive as many Schwarzenegger films, the suspense
never resolves until the end. This is an amazing thrill ride of a film.

TagsMexico
Back to the Future Part III
Dick Tracy