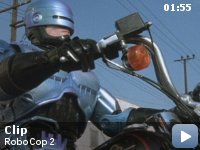 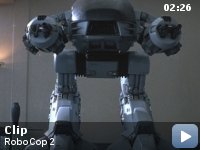 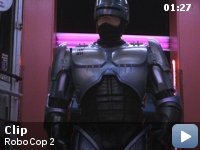 A corrupt businesswoman seeks to disable Robocop in favor of her own model of cyborg.

Storyline
After a successful deployment of the Robocop Law Enforcement unit, OCP sees its goal of urban pacification come closer and closer. But as this develops, a new narcotic known as "Nuke" invades the streets led by God-delirious leader Kane. As this menace grows, it may prove to be too much for Murphy to handle. OCP tries to replicate the success of the first unit, but ends up with failed prototypes with suicidal issues… until Dr. Faxx, a scientist straying away from OCP's path uses Kane as the new subject for the Robocop 2 project, a living God.

Taglines:
He's back to protect the innocents.

When Robocop walks away from the glass coffin supposedly containing Elvis, as well as pictures of Mother Theresa and Jesus on the wall, there is a photo of that other revered icon, Colonel Oliver North.

Continuity:
During the gun store scene, when Robocop gets out of his blown up car he "unholsters" his gun. For a brief scene his right hand is empty, and then it's holding the gun again.

Magnavolt Salesman:
MagnaVolt – The final word in auto security. No embarrassing alarm noise, no need to trouble the police… And it won't even run down your battery!

And now…a word on nutrition

RoboCop 2 is probably the most under-rated and most harshly criticized
sequel in history (tying with Predator 2, which came out the same
year). Because of a few missing elements from the first and a slightly
more cartoonish approach to the violence, the critics and public alike
were not pleased and opinions and feelings toward the franchise
nosedived with the just plain awful RoboCop 3.


Don't con yourself out of a good movie though. RoboCop 2 still has the
same savage sense of humor, cynical social commentary and character
pathos of the first film. It's a hyper-realistic vision of an America
populated by gun-loving psychos, a democracy owned by big business and
the poverty-stricken addicted to drugs dealt to them by peddlers
believing themselves to be the second coming of Christ.

Far-fetched could be the typical way of describing it.
Completely-over-the-top would be more appropriate. Empire Strikes Back
director Irvin Kershner chucks in as much sadistic violence, deafening
gunfire, endless destruction and loss of human life that the film just
begs you not to take it so seriously.

Some of the blame was placed on writer Frank Miller for the film being
more cartoonish than the original. I don't think this is very fair. I
read Miller's original script when I was in high school and it is
rather different and, dare I say, unfilmable. RoboCop 2 himself was not
Nuke Lord Caine, the psychotic hippie with delusions of Godhood. He was
called Kong, a psychotic cop who pretty much killed everybody he came
across. Sgt. Reed and the Old Man died too, and there wasn't much
humor. Screenwriter Walon Green was hired to doctor the script and much
of what appears on screen is actually his work. Frank Miller's original
ideas are pretty much just left as the framework for the whole movie
and some of his story was recycled into RoboCop 3 (don't blame him for
that one either). Miller was obviously upset with this but was still a
good enough sport to appear in the film (keep a lookout for him playing
Doctor Frank), though he vowed not to work in Hollywood again for fear
of being taken advantage of. Until Robert Rodriguez promised to make
good on his Sin City graphic novels.

Verhoven may be gone but Irvin Kershner tries hard to deliver the same
mix of mirth and magic and actually does get it right. Basil
Poledouris' brooding score is also gone (it returns in RoboCop 3) but
new composer Leonard Rosenman creates a wonderfully heroic and upbeat
theme that suits the film more than Poledouris' moody, tormented score
to the first.

There have also been many complaints that the humanity of RoboCop and
his relationship with Lewis was neutered along with too many other
ideas fighting for screen time. I get why most would be annoyed by this
but you have to remember that films need to be economic when it comes
to length. If every single idea was fully explored and fleshed-out
RoboCop 2 would have been 4 hours long. In my opinion each thread has
just enough for keen viewers and fans to appreciate. Lazy viewers only
see what they want to see and I feel that this has led to many of the
negative reviews the film has been met with (which usually comment on
how "offensive" the character of Hob is-sheesh, gimme a break). And
don't give me that the "humanity" of the first film is gone. Murphy has
not resigned to being a machine. He lies to pacify OCP. Pay attention
to the very last line of dialogue in the film if you want proof.

Filmed once again in Texas, Houston this time, you really have to feel
for Peter Weller walking around in that Robosuit. It must have weighed
a ton and he'd be sweating bucketloads inside. There is a particular
scene in the film where Murphy is tortured into near-death/destruction
that is very hard to watch. But it does lead to him getting a brand-new
makeover and those crazy new directives put into his head. The bit
where he lectures the Little League kids and scolds the youngsters
playing by the leaky fire hydrant (after quoting some very suspicious
philosophy) is hilarious.

RoboCop 2 is a great movie. Despite harsh critisisms of the script and
story and some slightly dated stop-motion effects it's a brilliant
sequel that lives up to expectations. Do listen to the nay-sayers. I
don't know what kind of film they were expecting.

And thank you for not smoking!