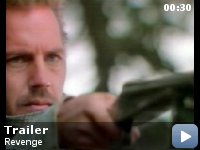 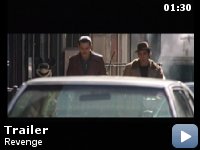 Michael "Jay" Cochran has just left the Navy after 12 years. He's not quite sure what he's going to do…

Storyline
Michael "Jay" Cochran has just left the Navy after 12 years. He's not quite sure what he's going to do, except that he knows he wants a holiday. He decides to visit Tiburon Mendez, a powerful but shady Mexican businessman who he once flew to Alaska for a hunting trip. Arriving at the Mendez mansion in Mexico, he is immediately surprised by the beauty and youth of Mendez' wife Miryea. Their attraction to each other is undeniable, but Cochran is aware that Mendez is a powerful, vindictive, and very possessive man who does not tolerate betrayal.

Taglines:
There's only one passion more uncontrollable than love.

Jim Harrison's novella "Revenge" was published in Esquire magazine in 1979.

Factual errors:
During Jay's farewell party, several of the attendees can be seen wearing their covers (hats and caps). This is incorrect; Navy regulations state that covers may be worn indoors only during formal military ceremonies.

Michael J. 'Jay' Cochran:
I killed a man who I hated today.

Atmospheric and well acted, a bit of a sleeper.


Kevin Costner in his early days managed to convey a rawness to his
characters that was seldom seen after he made "Dances with Wolves" and
became a successful producer. Films such as "No Way Out" (1987), "Bull
Durham" (1988) and of course "Revenge" (1990) showed him when he was
trying to establish his career and you could feel the actor at work
rather than the movie maker.


In "Revenge" Costner plays US Navy pilot Michael "Jay" Cochran who is
retiring after 12 years in the service. He seems to have lost direction
and wants to take some time out for himself. He plans first to go and
see his old friend and Tennis partner Tiburon "Tibby" Mendez (Anthony
Quinn) who is a powerful mob boss in Mexico. Exactly why they are
friends is a little unclear but it seems that Tibby owes Jay a debt for
saving his life at some point in the past. Once Jay arrives at the
Mendez Hacienda he meets Miryea (Madeleine Stowe) Tibby's wife.
Instantly attracted to one another and although initially fighting the
chemistry between them, they begin an affair, which comes with massive
consequences.

This film has elements of "The Wild Bunch" (1969) to it and the
location shooting in Mexico adds so much to the atmosphere and tensity
of the story. There are seamy and claustrophobic qualities to many of
the situations which are enhanced beautifully by the background. The
acting is nicely understated, Costner manages to display a barely
restrained anger throughout the second part of the film and Anthony
Quinn is convincing as the superficially charming but totally ruthless
mobster. Madelaine Stowe is OK as the female lead but struggles with a
Mexican accent and seems a bit uncomfortable with the innocence that
her character is supposed to portray.

"Revenge" was commercially unsuccessful but is one of those movies that
deserves to be seen. Costner, being an actor of limited range, was
always best at these type of roles. When he behaves rather than acts,
you get to see the best of him.

If I have any complaints, I believe the denouement of the story,
although certainly interesting, doesn't quite fit. The build up to it
promises something more of a violent showdown and the character of Jay
would seem by this point to be poised to take his "revenge". Perhaps
the downbeat finish was done to avoid "going Hollywood" with a big
finale and as i mentioned it is certainly effective, but leaves a
general feeling that there is business still to be done.

An interesting and entertaining movie that is well worth viewing.