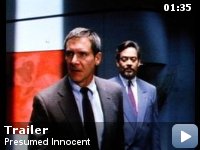 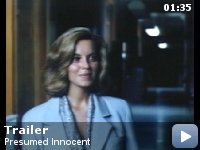 When the woman deputy prosecutor R.K. Sabich had an affair with is murdered the prosecutor asks him to lead the investigation. When Sabich digs too deeply he finds himself framed for the murder.

Storyline
After his former girlfriend is killed and he becomes the prime suspect, D.A. Rusty Sabich goes on a search to find the real killer and finds out he/she may be closer to him than he thinks.

Taglines:
Sometimes it's dangerous to presume.

John Spencer (Det. Liprazer) and Bradley Whitford (Jamie Kemp) would go on to star together in The West Wing (1999).

Continuity:
When we see Rusty in Stern's office explaining the prosecution's case, while standing his right hand is on chair, but when shot changes to a shot from behind, his hand is in his right pocket.

Rusty Sabich:
[voiceover]
I'm a prosecutor. I'm part of the business of accusing, judging and punishing. I explore the evidence of a crime and determine who is charged, who is brought to this room to be tried before his peers. I present my evidence to the jury and they deliberate upon it. They must determine what really happened. If they cannot, we will not know whether the accused deserves to be freed or should be punished. If they cannot find the truth, what is our hope of justice?


As a thriller this is top notch; as any kind of a movie it is also top
notch. Based on Scott Turow's best-selling novel of the same name (his
first), it relies on a well-coordinated directorial effort by Alan J.
Pakula (Sophie's Choice 1982, All the President's Men 1976, Klute 1971,
etc.), a fine script by Frank Pierson (whose credits include Cool Hand
Luke 1967, Dog Day Afternoon 1975, A Star Is Born 1976, etc.), and an
experienced, talented and well-directed cast headed by Harrison Ford,
Brian Dennehy, Raul Julia, Bonnie Bedelia, Greta Scacchi and Paul
Winfield.


Ford plays Rusty Sabich, a prosecutor compromised by his sexual
obsession with a fellow prosecutor, Caroline Polhemus (Scacchi) who is
found murdered as the film opens. We see her in flashback as a
conniving mantrap who uses her wiles to further her career. Sabich is
assigned to the case by his boss, Raymond Horgan (Dennehy) who is up
for reelection. Sabich would like to recuse himself but Horgan demands
that he take the case and get the perp "yesterday" otherwise they will
all be out a job because he will lose the election. Bedelia, looking
particularly beguiling, plays Sabich's sexually frustrated and deeply
hurt wife, Barbara.

When the election is lost the new prosecutors arrest Sabich and charge
him with murder. He is defended by the very smooth Raul Julia who plays
defense attorney Sandy Stern. Paul Winfield, in a somewhat flamboyant
style, plays Judge Larren Lyttle.

Because Scott Turow knows the way the law works in practice as well as
in theory, he having been a lawyer before he became a best-selling
writer, we are treated to wood paneled intrigues and courtroom
theatrics that have the unmistakable feel of authenticity. The dialogue
is veracious and the character cross-currents vividly real. Ford gives
what I think is one of his best performances as a man tormented by his
infidelity and caught in a vise of circumstance largely stemming from
that infidelity. Dennehy is a big-mouthed and big-headed politician in
the familiar Windy City style. Raul Julia's Sandy Stern is cosmopolitan
and brilliant, cynical and slick, a kind of Latin Johnny Cochran.
Bedelia, whom I recall best as Shirley Muldowney in Heart Like a Wheel
(1983) manages a delicate (and slightly unbelievable) persona with just
the right amount of forbearance so that when the surprise ending comes
we almost believe it.

I say "almost," but you might want to judge for yourself.

See this for Harrison Ford who plays a foolish and morally compromised
man with just the sort of right stuff and disarming vulnerability we've
come to expect from one of Hollywood's most popular leading men.