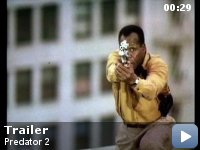 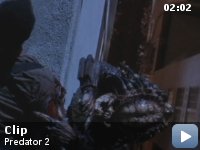 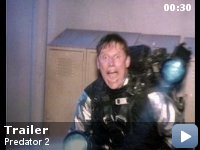 Amidst a territorial gang-war, a sophisticated alien hunter stalks the citizens of Los Angeles and the only man between him and his prey is veteran LAPD officer, Lieutenant Mike Harrigan.

Storyline
LAPD lieutenant Mike Harrigan and his cocky detective partner Jerry Lambert soon realize that what seemed a bloody feud between voodoo high priest King Willie's Jamaican gangs and Ramon Vega's Colombian drug gang is actually the work of a scary third party. Peter Keyes's federal team shields the crime scene even for the LAPD. BUt after forensics proves it must be an alien, who keeps making victims, the chase brings them all together.

Taglines:
This time he's coming to a different kind of jungle

The slaughterhouse sequence took about four days to shoot and was extremely difficult, according to director Stephen Hopkins, due to the amount of water used and the lighting of the sequence.

Revealing mistakes:
The Predator's telescoping pike is actually two special effects props, depicting a first and second stage elongation. In the scene where The Predator deploys the pike on the slaughterhouse rooftop, you can see him drop the first stage pike prop out of frame before the camera zooms in on him and he grabs the fully extended pike prop.

Reporter:
As drought-ridden Los Angeles swelters in agonizing heat, drug lords wage bloody warfare in the streets. Yet another open conflict… Oh, fuck this, get me out of here!


WTF is wrong with people? Predator-1 had more Arnie than Predator. This
movie simply has more Predator. It also greatly expanded the Predator
universe and franchise. It introduced a whole new bunch of Pred
weapons, tactics and behavior which never ever seemed out of place and
were perfect fits. It explored their race further. All these were added
to full effect in the AvP and AvP-2 PC games which were smash hits so
imagine how horrible it would be if this movie never happened? The
urban (steel jungle?) setting contrasts against the previous jungle
setting and is a major plus for this movie. This movie was also
extremely realistic and gory. All in all, this movie is fantastic and a
few ignorant critics just want to bring it down by comparing it with
the uniqueness of the original.