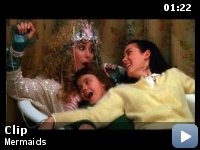 An unconventional single mother relocates with her two daughters to a small Massachusetts town in 1963, where a number of events and relationships both challenge and strengthen their familial bonds.

Storyline
After yet another failed relationship, Mrs. Flax (Cher) ups her family to the east coast to start all over again. Reluctantly dragged along with her is her daughter Charlotte – going through a very confusing time of her life – who wants to become a nun, and instead falls in love with a quiet, mild-mannered church employee, to the mixed response of her mother. Set at around the time of the Kennedy Assassination.

Taglines:
This is our mother. Pray for us.

In the scene where Charlotte and her mother fight about Kate's accident, Charlotte gets angry and breaks a plate. The scene ends with her mother slapping her in the face after a rude comment. The exact same things happened in Cher's film
Mask.

Continuity:
Charlotte's blue eye shadow disappears and reappears as she goes to/returns from the hospital.

Charlotte Flax:
I'm going to make real sandwiches; big ones that a man can sink his teeth into.

A delightful period piece set appropriately in 1963. Appropriate because
Charlotte (Wynona Ryder), like the nation, is about to shed a little of her
innocence and face some difficult realities. Cher, Ryder and an adorably
young Christina Ricci are perfect as a single parent family. Cher, in her
best work ever, including Moonstruck, is a free-spirited mom who only cooks
finger food because anything else is too much of a commitment. Ryder, who
narrates the film from her character's perspective, is a high school student
who, despite her fervent wish to lead a devout life, falls in love with the
local handyman. Ricci is the youngest, a champion swimmer who steals the
whole movie with scenes like her pumpkin scene. (Watch it and you'll know
what I'm talking about. It's unforgettable.) Bob Hoskins is hilarious as
the shoe salesman who falls head over heels for Cher, family and
all.


Set in coastal Massachusetts, the scenery is breathtaking, and the idyllic
depiction of life in a small town in the last days of American innocence is
dead on. Director Richard Benjamin, who also gave us such charming films as
Milk Money and My Stepmother is an Alien, rivals Penny Marshall and Rob
Reiner with this gem.

This film is perfection, an absolute 10. It's a magic potion that can make
me laugh and feel good even on the worst day. I sometimes wish I could step
inside a la Pleasantville and stay there.