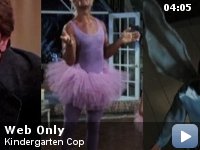 A tough cop is given his most difficult assignment: masquerade as a a kindergarten teacher in order to find a drug dealer.

Storyline
John Kimble is a tough city cop who's been on the trail of drug dealer Cullen Crisp for years. He finally tracks Crisp down but it seems the only person that can testify against him is his ex-wife. The problem is she's disappeared and all Kimble knows is the name of the school in Oregon where her son attends. When things don't quite go to plan, Kimble finds he has to go undercover on his toughest assignment yet – Kindergarten teacher!

Taglines:
He's the toughest undercover cop in LA. If you're bad he'll know it. If you're hiding something he'll find out. If you cheat he can tell. Now…

Continuity:
Phoebe's position after being hit by the car after the fire at the school.

Phoebe:
Not so tough without your car, are yeah?

This movie should be so bad, and yet…

So I'm watching KINDERGARTEN COP in a bit of a stupor because the remote
control is too far for me to reach when I suddenly realize something
amazing: This movie is fantastic. In the calculus of Hollywood dreck,
KINDERGARTEN COP doesn't add up. Take 1 muscle-bound action hero, a dozen
too-cute kids and a plot so contrived it makes an episode of any television
sit-com look downright plausible and you should have a mess fit only for
release straight to video in Third World nations–do not pass "Go" (or your
local metroplex) or collect $200. In fact, I would love to meet both the
person who pitched this idea and the studio head who gave it the green
light:


Pitchman: "Imagine MARY POPPINS without the namby-pamby animation and music
and twice the butt-kicking! Oh, and instead of Dick Van Dyke faking a
British accent we'll have Arnold Schwarzenegger faking intelligible
dialog!"
Studio Exec: "I love it! Here's umpteen million dollars to get it
made!"

And the freakin' movie works! It really does. The script is filled with
some great lines (My favorite, of course: "It's not a tumor!"), sweet
characters and some low-key acting from the principles that keeps the story
from becoming maudlin. This is one of maybe three movies I can think of
that I would be comfortable watching with my parents, minor relatives or
beer-drinking buddies. (Coincidentally, another one of the three is
GHOSTBUSTERS, also an Ivan Reitman flick.) It has bloodless action,
quotable lines and an ending that is satisfying. It just shouldn't exist.
Maybe the fact that it does exist proves the William Goldman line about
Hollywood: "Nobody knows nothing."

Take some advice from your Uncle Guy: If you're stuck with the kids or a
date you don't know and you need to sit at home and watch a movie, put in
KINDERGARTEN COP. You won't be disappointed, and you just might like it.
And this advice comes from a big curmudgeon.