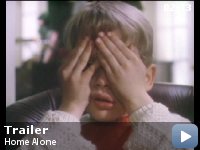 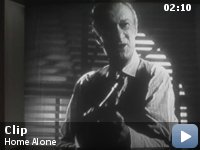 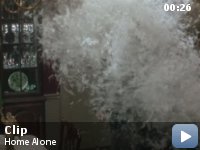 An 8-year-old boy, who is accidentally left behind while his family flies to France for Christmas, has to defend his home against idiotic burglars.

Storyline
It is Christmas Time and the McAllister family is preparing for a vacation in Paris, France. But, the youngest in the family named Kevin got into a scuffle with his older brother Buzz and was sent to his room which is on the third floor of his house. Then, the next morning, while the rest of the family were in a rush to make it to the airport on time, they completely forgot about Kevin who now has the house all to himself. Being home alone was fun for Kevin, having a pizza all to himself, jumping on his parents' bed and making a mess. Then, Kevin discovers about 2 burglars, Harry and Marv about to rob his house on Christmas eve. Kevin acts quickly by wiring his own house with makeshift booby traps to stop the burglars and to bring them to justice.

Taglines:
When Kevin's Family Left For Vacation, They Forgot One Minor Detail: Kevin. But Don't Worry… He Cooks. He Cleans. He Kicks Some Butt.

The movie is considered a traditional Christmas movie in Poland. It has aired on national TV during prime time Christmas season every year since 1990. In 2011 the movie aired on December 23rd with an audience of over 5 million, making it the most popular show aired during the Christmas season in Poland. One of the reasons for this is because the movie was one of the first western productions aired in Poland after the fall of communism.

Incorrectly regarded as goofs:
On the phone with the French operator, Peter yells "I am looking for my son! Do you know where he is?" It seems a silly question as Peter should know that Kevin is at the house, but in a previous scene a police officer goes to the McAllister house and receives no response to repeated knocks and bell-ringings. It's likely that the police would've relayed this information back to the McAllisters and that this would explain Peter's frantic mood.

Marv:
He's only a kid Harry. We can take him.


Oh, come on, IMDb users. How could this film get only a 6.5? Yes, it's
a kid's movie, but I know plenty of adults(not including myself) who
loved this film. It touches our hearts, and tickles our funny bones.
Not to mention I think in one way or another we could relate to it.
That's why it remains a classic Christmas comedy.


Home Alone is not only one of the highest box office successes of all
time, but it deserves more praise. Mac showed a talent that very little
child stars have now-a-days. He brought in a great comedy about a boy
who accidentally is left home alone when his family goes on vacation
and takes on two burglars.

Yeah, it's quit unrealistic about the burglars, but honestly, this is a
terrific family film. Joe Pesci and Daniel Stern are the perfect comedy
duo of two idiots who can't rob the place because a 8 year old child
has out witted them and set some clever and very funny traps around the
house.

Please give this movie a chance, it's just terrific and I guarantee
nothing but great laughs for you and the whole family.