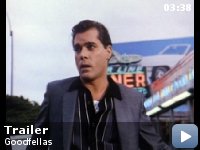 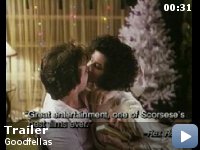 Henry Hill and his friends work their way up through the mob hierarchy.

Storyline
Henry Hill is a small time gangster, who takes part in a robbery with Jimmy Conway and Tommy De Vito, two other gangsters who have set their sights a bit higher. His two partners kill off everyone else involved in the robbery, and slowly start to climb up through the hierarchy of the Mob. Henry, however, is badly affected by his partners success, but will he stoop low enough to bring about the downfall of Jimmy and Tommy?

Crew or equipment visible:
When Henry and Karen hide the gun at her mother's house, a camera is visible in the background.

Henry Hill:
The fuck is that?

An Offer You Can't Refuse…

Gangsters are all around us. Everyone knows it, not everyone wants to
accept it. "Goodfellas"–based on true events–explores the lives of
gangsters, chronicling the events through the eyes of Henry Hill (Ray
Liotta), who gets involved with the Mafia at a young age and continues
his "career" throughout the film.

As he gets older, he marries and has children, but still works for the
organized crime family, under mob boss Paulie (Paul Sorvino); and he is
friends with Jimmy (Robert De Niro), a calm, steady gangster; and Tommy
(Joe Pesci), a wild man with serious mental problems.

Eventually Henry's life goes down the gutter, leading to drug abuse and
paranoia, that leads to other unfortunate incidents that will be ruined
if I type any more about them.

"Goodfellas" is one of the best films I have ever seen. It's a tour de
force of breathtaking images, witty scriptwriting, superb acting and
realistic violence.

Robert De Niro gives one of his best performances — ever — as Jimmy,
even if he's not in the film as much as you might be lead to believe
from the front cover.

Joe Pesci is in this movie about as much as De Niro, maybe a bit more
or less. But when he's on screen there's no doubting he's on
screen–he's very hard to miss. A short, deranged, loud-mouthed man
with something wrong in his head. Someone makes an insult toward him
and he shoots them, and then laughs. It's quite disturbing. I am a huge
fan of Pesci, and I tend to love his characters, but he really makes
you feel sick towards his character in "Goodfellas," while at the same
time taking a strange liking to him. That just goes to show how good of
an actor Pesci is.

Ray Liotta is perfect as Henry Hill. I can't think of a better actor to
play him. He captures a sense of innocence yet at the same time a
feeling of violence. I love the scene where he walks over to a man's
house with a regular expression on his face. "What do you want, f&*^&?"
the man asks. Liotta continues walking, takes out a gun, and starts to
continually beat the man in the skull with the butt of his gun. As
Henry walks back to his car, his face is disturbing and his expression
stays with you for a long, long time.

Martin Scorsese is a brilliant director and his work here is fabulous;
it's been recreated by other directors (namely Paul Thomas Anderson in
"Boogie Nights") and there's a reason: it's great stuff. He totally
deserved to receive Best Director in 1990, but of course he didn't.
(Rumor has it the Academy frowns on Scorsese's use of racial slurs in
his work. Oh boo hoo, get over it.)

The movie is based on the true-crime memoirs of the real-life Henry
Hill, whose novel with Nicholas Pileggi — "Wiseguys" — was adapted
into a screenplay by Pileggi and Scorsese. The book itself was
fantastic and insightful; the screenplay is even better. The dialogue
is incredible.

Anyway, "Goodfellas" has to be one of the best films I've ever seen–a
true modern classic that will be remembered for what it is: One of the
greatest tales told on screen. It's an offer you can't refuse!