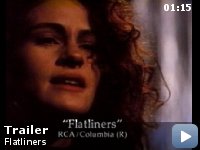 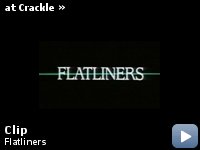 Medical students bring themselves near death; their experiment begins to go awry.

Storyline
Medical students begin to explore the realm of near death experiences, hoping for insights. Each has their heart stopped and is revived. They begin having flashes of walking nightmares from their childhood, reflecting sins they committed or had committed against them. The experiences continue to intensify, and they begin to be physically beaten by their visions as they try and go deeper into the death experience to find a cure.

Taglines:
Some lines shouldn't be crossed.

Joe Hurley:
I don't know. Not thinking about the past or the future. I don't know it's difficult to explain, maybe impossible.

David Labraccio:
Yeah, dying is quite that way.


The basic premise of Flatliners is fairly simple. Several medical
students put themselves at the point of death in order to find out
exactly what the brain does during the fact. It sounds like something a
mob of bored students would do for a joke, but it forms the basis of
some very creepy substories. In today's world, where Hollywood has to
mine foreign markets for the ideas to make a horror film, Flatliners is
one of those rare gems that show Hollywood can make something different
when it tries hard enough.


What separates Flatliners from a lot of films based on this premise
that would come out today is that it does not stoop to being
condescending or arrogant. Flatliners recognises that people go to
films to be entertained, not moralised to. In this kind of supernatural
thriller, the difference this restraint makes is really incredible.
What's even more incredible is that Julia Roberts appears without being
annoying or demonstrating that she can only play Julia Roberts. The
theory of obscurity, that performing artists do their best work with
the smallest audience, is in force here.

The subplots concerning what the characters find during their loss of
pretty much everything that makes them alive, and how it comes back to
intrude on their present time, are done surprisingly well. The moments
when William Baldwin's character finds his personal videotape
collection coming back to haunt him are especially intriguing. That
William Baldwin seems so perfectly cast in the role says a lot either
about the script or the direction. I am not sure which.

Kiefer Sutherland, on the other hand, really shines as the lead. One
really feels for him as the mystery of what past experience is
intruding on the present and why unfolds. As Kevin Bacon's character
goes to find an old school pier whose life he made hell and tell her
how sorry he is, it becomes clearer what the film is about. We can try
to change the past as much as we like, but it's what we do with the
present that matters most.

Another good aspect of Flatliners is how it achieves an atmosphere
without the use of expensive, elaborate visual effects. Quite unusually
for what is essentially a horror film, Flatliners did not expend its
budget in places where it did not need to. Much of what we see during
the more surreal sequences is a case of professional pretending, simple
trick photography, or stock footage. Sometimes the simplest things are
the best.

If there is a problem with the film, it's that it feels about ten
minutes too short. The ending seems more perfunctory than conclusive,
as if someone in the studio asked the director to wrap the film up so
they can bring it out at a certain market time. Of course, many films
have been left with sore spots for this very reason, so Flatliners
shouldn't really need to be any different. The hundred and fifteen
minutes we do get is highly satisfactory, though not overly brilliant.

I gave Flatliners a seven out of ten. It works well as a date flick or
a kind of late-night popcorn film. That aside, it makes a good reminder
that low-budget horror shows weren't always sad pieces of garbage.