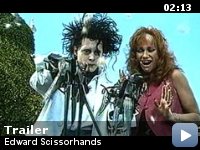 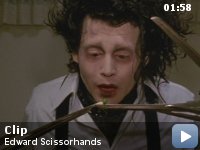 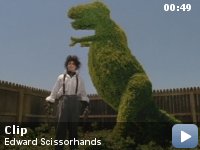 An uncommonly gentle young man, who happens to have scissors for hands, falls in love with a beautiful teenage girl.

Storyline
In a castle high on top of a hill lives an inventor's greatest creation – Edward, a near-complete person. The creator died before he could finish Edward's hands; instead, Edward is left with metal scissors for hands. Since then, Edward has lived alone, until a kind lady called Peg discovers Edward and welcomes him into her home. At first, everyone welcomes Edward into the community, but soon things begin to take a change for the worse.

Taglines:
Innocence is what he knows. Beauty is what she sees.

The restaurant that the family eats at was, at one time, a real restaurant; a national chain diner called "Sambo's". It was located directly across the street from Southgate Shopping Center, as appears in the movie. Due to the controversial nature of the name and interior design, the diner (and entire chain) closed sometime in the late 70's/early 80's except for the origonal location in Santa Barbara, California, which to this day remains open in it's origonal location. It remained an abandoned building for many years, until Tim Burton came to town to film "Edward Scissorhands". Burton's crew unboarded the doors and windows and redressed the interior to look like a working restaurant again.

Plot holes:
Edward has a flashback memory of a time before he was even created.

Kim:
Snuggle in, sweetie. It's cold out there.


Many people say the cried at the end of this movie… Huh! Knowing the
plot already, I (a grown up man) can barely hold my tears from the very
beginning whenever I watch it. Much more than just a "cute and sad
fairy tale", this movie is a true piece of art. This is one of those
rarest cases when a bunch of talented and truly, but truly dedicated
people set out to create something beautiful, some chemistry occurs and
… a miracle happens. Fortunately for all of us, this miracle
immortalized on film.


Throughout the human history, the wisdom of generation was conveyed
through fairy tales. This tale is no exception. This story, told in
magic simplicity, actually has some deep philosophical meanings. While
mercilessly debunking the true nature of human beings, this tragic
story really tears your heart, and yet it fills it with hope. That is
the true and, perhaps, the only purpose of art, if you ask me.

Why do we need music, painting, theatre, poetry? Is there a real excuse
for their existence? To me, the only purpose, the only excuse is to
help people go on, to give them hope. And it's well worth it!

To sum up, easily Tim Burton's best, this film is a masterpiece, my
favorite American movie, and probably one of the best movies of all
times. 10/10