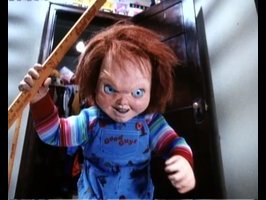 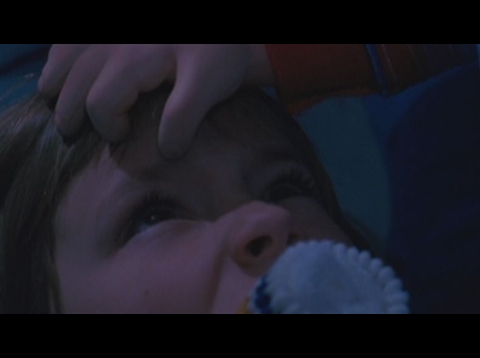 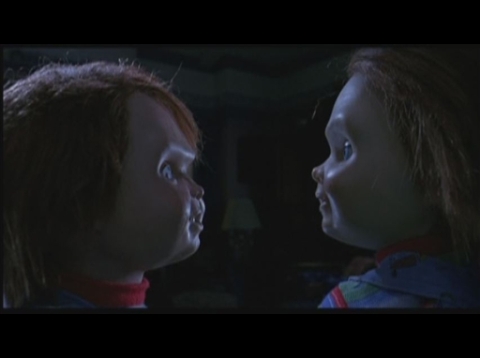 Chuckie's back as the doll possessed by the soul of a serial killer, butchering all who stand in his way of possessing the body of a boy.

Storyline
Andy Barclay has been placed in a foster home after the tragic events of the first film, since his mother was committed. In an attempt to save their reputation, the manufacturers of Chucky reconstruct the killer doll, to prove to the public that nothing was wrong with it in the first place. In doing so, they also bring the soul of serial killer Charles Lee Ray back to life. As Chucky tries to locate Andy, the body count rises. Will Andy be able to escape, or will Chucky succeed in possessing his body?

Taglines:
Look out Jack! Chucky's back!

According to 'Don Mancini' on the commentary for the first film on DVD, the reason the rest of the "Child's Play" films are released by Universal instead of MGM/UA, (despite the first film being very successful)was that United Artists was bought out by a company that wanted to abstain to a "Family Friendly" slate of films. So the property was sold gladly to Universal.

Revealing mistakes:
In the beginning of the movie when they are putting Chucky together, you see one of the Play Pals employees air brushing the freckles and eyebrows on Chucky's face but he didn't paint the eye lashes, he missed completely. Later on in the movie, you see that Chucky does in fact have those painted eye lashes even though they were never painted on.

Chucky:
Hug this!
[bludgeons the doll with a figurine]

Not much more than a continuation, but still a worthy sequel.


I think I liked Child's Play 2 more than most people, given the reviews
that I've read and the movie's low voter rating on the IMDb. A cute
kid's doll is once again the unlikely home of Charles Lee Ray,
notorious serial killer, again feeding off of the surrealism created by
seeing a kid's doll screw it's face into expressions of the purest rage
and spouting all manner of profanities. By now, Ray is becoming more
and more desperate to get out of the body of the doll, because as we
were informed in the first film, if he spends too much time in that
body he'll gradually become more and more human until one day he'll be
stuck in it forever. Needless to say, Ray's a lot more interested in
starting life over as a 6-year-old (and who wouldn't?) rather than
spending the rest of his life as a plastic doll.


Although, given that he becomes more human the longer he is in that
body, how human will he eventually become? Will he ever reach full
human-hood? My guess is that he'll gradually approach being a real
human being in a sort of half life, where he gets closer and closer and
closer but never actually gets there, kind of like computer generated
actors. There is currently much talk about how close computers can ever
get to animating convincingly real people into the movies, and the
leading theory seems to be something akin to my theory of Chucky
turning human. He'll always get closer but he'll never get all the way
there.

At any rate, Andy's mother has landed in a mental institution and Andy
has been taken in by a foster family with appropriate mental vacuity to
be a horror movie surrogate family. When Andy becomes frightened and
runs through the house, his foster father grabs him and says, 'Rule #1,
no running in the house!' OK, 'dad,' but not even when I open a closet
and find myself confronted by the doll that landed my mom in the
nuthouse and almost cost me my life and my very soul? My God, man, what
the hell is this guy doing with a Good Guys doll in the house in the
first place? It's difficult enough trying to figure out why it's even
there WITHOUT having to watch this mental giant grab Andy by the arm
and ask him what on earth is the matter.

There are some funny moments in the film, such as when Chucky smashes
the head of the innocent Good Guys doll, buries it, and takes its place
in the house, and my favorite, when Chucky is later addressed by a
doting adult, Chucky responds by saying in his cute doll voice, 'Hi!
I'm….Tommy!'

The stockholders in the Play Pal corporation are distressed over the
suffering that the company has endured due to the negative publicity of
the events of the first movie provide the premise for the movie's
rather impressive finale. In order to generate a more positive image
for the company and the doll, they have decided to reintroduce it into
the market. The original Chucky doll was collected by the company and
examined by toy-makers, who decided that there really was nothing truly
wrong with it, it was not really a demon-possessed toy, so they decided
to melt it down and remake it. Why they didn't just throw it away I'm
not really sure, but who cares. Waste not, want not, I guess.

At any rate, Chucky comes back in a fresh plastic body (too bad he
can't be transferred to a human as easily as he can be transferred from
one doll body to another), and once again resumes his quest for Andy's
soul. I've heard complaints about why Chucky had to go after Andy and
couldn't just find a bum on the street or something, but you'll
remember in the first movie, the conditions of his plastic entrapment
stated that he could only transfer into the body of the first person
that he revealed his identity to once he was inside the Chucky doll.

Jarrett Friend, writing for HorrorWatch, made the above suggestion
having forgotten that little stipulation, but also smartly suggested
that the plot should have involved a huge number of Chucky dolls, since
the original doll was melted down and whose plastic conceivably should
have infected much more dolls than just the one that we saw in this
movie. This would have made the movie much more interesting and added
another level of originality; my guess is they just didn't have the
budget for something that big.

Nevertheless, even though the first sequel in the Child's play series
comes dangerously close to falling into that sophomore sequel chasm of
falling flat because of obviously feeding off the success of its
predecessor without having much of anything to add to the story,
Child's Play 2 escapes into the world of moderately acceptable horror
sequels, kind of like Psycho II, which had no hope of matching its
predecessor but at least was able to justify its own existence.

I think it's easy to be put off by the conclusion of Child's Play 2,
but I was pretty impressed with the toy factory setting, if only
because it created such a great atmosphere for Chucky to make his hunt
and Andy and his foster sister Kyle to try vainly to escape. There was
some pretty clever stuff in the final act of the film, not including,
however, the scene where Kyle and Andy run around completely lost,
making the factory seem like a maze by editing together a lot of clips
of them clearly running around the same corner half a dozen times or
so. A bit trite, but nothing compared to my biggest gripe of the film,
which is the final scene, one of the goofier things that I've seen on
an otherwise at least moderately competent horror movie.

Odd for a movie to try so hard to live up to its expectations and then
belittle itself with something like what I'll just call the air hose
scene. I do, however, think that the movie was successful and good
enough to deserve a better DVD than it got. I can't stand it when the
only extra features on the DVD for a successful film are nothing but
some foreign audio tracks and cast and crew history that is nothing
more than a brief biography and a list of film credits. What do you
think the IMDb is for?