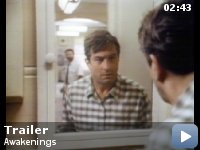 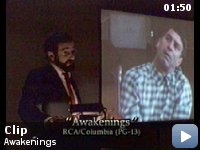 The victims of an encephalitis epidemic many years ago have been catatonic ever since, but now a new drug offers the prospect of reviving them.

Storyline
A new doctor finds himself with a ward full of comatose patients. He is disturbed by them and the fact that they have been comatose for decades with no hope of any cure. When he finds a possible chemical cure he gets permission to try it on one of them. When the first patient awakes, he is now an adult having gone into a coma in his early teens. The film then delights in the new awareness of the patients and then on the reactions of their relatives to the changes in the newly awakened.

Taglines:
There is no such thing as a simple miracle.

Prior to filming, the actors portraying patients studied films of Dr. Oliver Sacks's actual post-encephalitis patients, and Robert De Niro and Robin Williams spent time with Sacks in the hospital observing him and his patients.

Anachronisms:
When Dr. Sayer takes Leonard out into the city for the first time, they see (among other things) an aircraft landing – a Boeing 747. The movie takes place in 1969 and the first revenue flight of the Boeing 747 was January 21st, 1970. Additionally, the 747 is in El Al livery that was used around 1990.

A Fascinating and Moving Story


Awakenings is the most emotionally moving film I have ever seen. It
delves deeply into one of the worst human fears, losing the ability to
move and function, but it's never forced or manipulative, and there's
no heavy-handed message or moral. It's just a fascinating story that's
beautifully told.


The acting is as good as you will ever see. Robert DeNiro deftly
handles all the emotional and physical challenges of his role, and
Robin Williams demonstrates convincingly that he is an actor, not just
a comedian. Williams is perhaps a bit too nerdy at first, but he
captures perfectly all the hope, fear, exhilaration, and anguish that a
doctor in that situation must be experiencing. Awakenings is based on
actual people and events, and, to me at least, real events are always
more powerful than even the best fiction.

Awakenings had big-name talent and Oscar nominations, but I don't think
it ever had a big box office or became a popular video rental. That's a
shame. I like escapist fare as much as the next guy, but once in a
while, everyone should see a movie that you will remember and think
about for a very long time. Awakenings deserves to be at the top of
your list of movies to see.

TagsUSA
Mermaids
The Bonfire of the Vanities